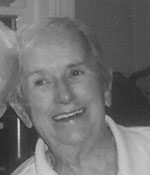 WAKEFIELD — Pauline A. “Polly” Berggren, 87, of Wakefield, died on Friday, July 28, at the Bear Hill Nursing Center in Stoneham.

Born in Wakefield on August 16, 1929, she was the daughter of the late Lester and Mary C. (McGrath) Gammons.

A graveside service will be held at Lakeside Cemetery in Wakefield on Wednesday, August 16, at 11 a.m. Relatives and friends are welcome to attend.