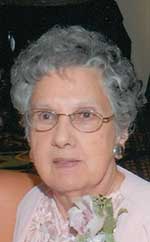 Pauline was born in Fitchburg on March 16, 1924. She was raised in Medford by Josephine and George MaGuire. Pauline enlisted in the Army Air Corps in 1944 and served her country honorably during World War II. After the war, Pauline worked as a clerk for Able Vending Co. and also worked as a Crossing Guard for the City of Medford. She was a longtime resident of Melrose and loved spending time with her friends playing rummy cube. Pauline also lived at the Levi Gould building for many years and had many friends there. She enjoyed crocheting and knitting in her spare time.