CPA was active in Baptist church, avid sportsman and always willing to help others 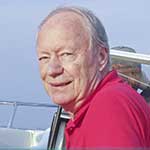 LYNNFIELD — William Ernest “Bill” Dawson, 90, of Lynnfield, left us peacefully, in bed beside his wife Ann early in the morning of Sunday, August 28.

Originally from Melrose and Alton Bay, New Hampshire, Bill was a friend to everyone. He participated wholeheartedly in whatever was going on. “We keep going by keeping going.”

Bill was born January 2, 1926 in Everett. He moved to Melrose in 1928, where he lived most of his life, except time spent at the family’s beloved lake house on Lake Winnipesaukee in New Hampshire. As a young boy, he mowed lawns and did odd jobs to help support his mother and sister. He graduated from Melrose High School with the Class of 1943. Then, he was off to the Army Air Force. He has ever since joked about his service, saying that there were more pilots than planes, so his group played a lot of football waiting for their turn to fly. The war ended before flight school began.

Without missing a beat, Bill enrolled in Boston University. He graduated with a bachelor of science in Business Administration, then skillfully combined part internships and full-time work to become the youngest CPA in the state of Massachusetts. He worked his way into an assistant treasurer position at the Stride Rite Corporation. Bill’s co-workers jokingly referred to him as their “money man” during most of his 26 years employment. He retired at 62 years old.

He met his wife Ann through friends in the Melrose First Baptist Church young adult group. He was always so proud to have caught her and they have been good companions ever since. They married in 1954 at the church, and were active members throughout their lives. They raised four children together.

Bill was a very active person. The list of sports he participated in is a mile long, his favorites being tennis, skiing and sailing. He read fiction, did Sudoku, and picked up some art skills later in life. Dad loved the water, any water, and boating of all kinds. In recent years, family gatherings at Wells Beach were a high point. Probably his favorite happy place was their summer home on Lake Winnipesaukee.

He had many involvements over the years. The First Baptist Church was central throughout his and Ann’s lives. In addition, Bill was a member of the Boston Yacht Club at Marblehead, and the New England Yacht Racing Association. Formerly, he served as Director and Officer for the Boston Baptist social union and then as a trustee. He was treasurer of the Baptist Home of Massachusetts. He also sat on the board of the Stride Rite Children’s Foundation for many years.

Perhaps his greatest legacy was his willingness to help others. Following his retirement, he volunteered at the hospital and did tax counseling for the elderly. He was recognized by the IRS for outstanding public service. And he was the always the first person to roll up his sleeves when there was something he could do to help, no matter what.

We all will miss his humor and quick wit, his graciousness, integrity, and good listening ear, his wholeheartedness and constant desire to participate and his deep caring.

Bill was the beloved husband of Ann (Minott) Dawson, with whom he shared 62 years of marriage. He was the devoted father of Karen Dawson of Burlington, Vermont; Peter W. Dawson and his wife Rosemary Breslin-Dawson of Portsmouth, New Hampshire; Cynthia Kenyon and her husband Rick of Brattleboro, Vermont; and Sally Ann Dawson of Springfield. He was the dear brother of the late Betty True. He was the loving grandfather of Michael Dawson, Kevin Dawson, Sarah Dickstein and Danielle Dickstein. He was the cherished great-grandfather of Brady Bradshaw.

Relatives and friends will gather in honor and remembrance of Bill’s life during visiting hours at the Robinson Funeral Home, 809 Main St., Melrose on Wednesday, August 31 from 5-7:30 p.m., and for his Funeral Service at the First Baptist Church, 561 Main St., Melrose on Thursday at 11 a.m. For online tribute or directions, visit RobinsonFuneralHome.com.