Architect, Planning Board member had many interests 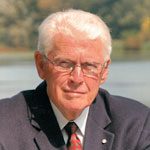 MELROSE — Philip J. Burne passed away quietly and peacefully on Sept. 9 at his home in Melrose.

He was raised and educated in Westford and Chelmsford, where he was an honor student. He continued his education at the School of Engineering at the University of Massachusetts – Amherst, where he belonged to the Kappa Sigma fraternity and first met his loving late wife Janice Anderson.

After graduating, he enrolled in U.S. Army where, after discharge as a First Lieutenant of the U.S. Army Corps of Engineers, he undertook post graduate studies becoming a registered architect in several states. He was certified by the National Council of Architectural Registration Boards and appointed as a member of the Commonwealth of Massachusetts Designer Selection Board under Governor King. He was a member of the American Institute of Architects and the Boston Society of Architects.

He opened his architectural firm in the early 1960s in Melrose and retired only a few years ago from this practice. He was a member of the Melrose Planning Board for 12 years. His projects, too numerous to mention individually, include the design of Saint Joseph Parish in Malden as well as eight other churches and in 1964 the additions to the Melrose Public Library and the surgical wing at the Melrose-Wakefield Hospital.

Phil resided in Melrose for over 50 years where he and his wife raised their four children. He was an avid reader and a history buff. He enjoyed dining out, dancing, golfing, swimming, skiing and going to museums, symphony, building ship models, the beach and the movies. He was an avid Patriot and Red Sox fan. He played in the same tennis group for years and later enjoyed their Friday morning coffees. Phil traveled the world extensively with his wife. He was a gracious host, who enjoyed entertaining and opened his home to many people. He loved socializing and attended events at the Society of Cincinnati, Peabody Essex Museum, and the French Cultural Center of Boston.

Phil was a member of the Sons of the American Revolution, Society of Colonial Wars and the Society of the Cincinnati where he served three terms as president of the New Hampshire Society. He was a trustee of the American Independence Museum of Exeter, N.H. He was the director of Oak Lawn Cemetery in Roslindale. He also served on the Board of Directors of the Alumni Association of University of Massachusetts.

Passionate about politics, Philip contributed to both the Reagan and Bush presidential campaigns and most notably attended the 50th American Presidential Inaugural Ball.

A funeral service to celebrate Philip’s life was held at the Gately Funeral Home, 79 West Foster St., Melrose, on Monday, Sept. 15, at 11 a.m.

Interment at Wyoming Cemetery in Melrose. To send a message of condolence please visit www.gatelyfh.com.