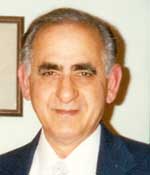 WAKEFIELD — Philip P. Buttiglieri Sr., 80, of Wakefield died on Thursday, Oct. 8, at the Pilgrim Rehab and Nursing Center in Peabody.

Born in Winthrop on Sept. 3, 1935, he was the son of the late Frank P. and Carmela (Iovine) Buttiglieri.

Mr. Buttiglieri was raised and educated in Everett and Revere and had been a Wakefield resident for the past 46 years. He was a retired truck driver for Cardinal Health in Peabody and was a school bus driver for the towns of Wakefield and Lynnfield.

Mr. Buttiglieri was a member of the Wakefield Sons of Italy.

He is survived by his wife Katherine M. (Papparelli) Buttiglieri; his two daughters, Gina M. Swansburg and her husband Donald of Tewksbury and Lisa A. Daly and her husband Graham of Lynnfield; his son Philip P. Buttiglieri Jr. and his wife Susan of Hamilton; his seven grandchildren: Donald IV, Kevin, Cori, Griffin, Mia, Elizabeth and Alexis, and his brother Richard Buttiglieri of Peabody. Mr. Buttiglieri was predeceased by his four brothers: Frank, Benjamin, Anthony and Robert Buttiglieri.

His funeral will be held from the McDonald Funeral Home, 19 Yale Ave., Wakefield on Tuesday at 9 a.m. followed by a funeral Mass in St. Florence Church, 47 Butler Ave., Wakefield at 10 a.m.

Visitation for relatives and friends will be held at the Funeral Home on Monday from 4 to 8 p.m. Interment will be at Puritan Lawn Memorial Park in Peabody.