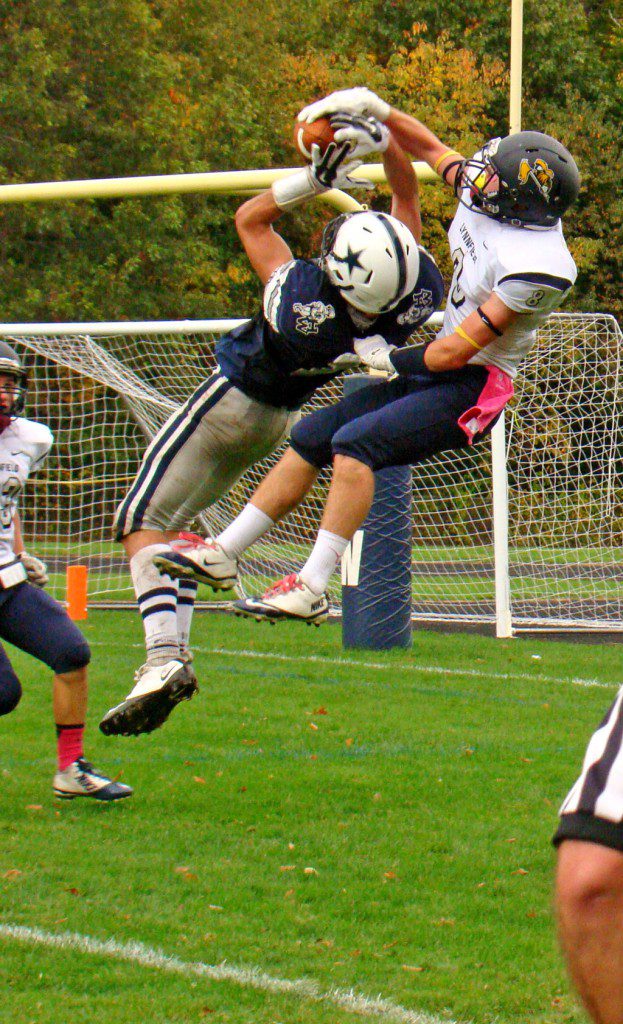 HIGH POINT of an undefeated season. Captain Cam Rondeau (8) leaps high to break up this potential TD pass in the end zone against Hamilton-Wenham, preserving the shut out in the CAL Baker Division championship game.        (Tom Condardo Photo)

HAMILTON — This one, as the Godfather might say, was strictly business.

Combining a suffocating defense with a lethal offense, the coolly efficient Pioneers took out the Hamilton-Wenham Generals 35-0 Saturday afternoon to capture the 2014 Cape Ann League Baker Division championship. It’s the third straight title for Lynnfield, the fourth in six years and the 11th in the history of the school.

“They were quiet today before the game. At the school, in the locker room, on the sideline,” head coach Neal Weidman said of his undefeated squad (4-0 CAL Baker, 6-0 overall). “I wasn’t quite sure how to take that.”

He needn’t have worried. The Pioneers were just getting down to business. Led by a stifling defense that forced four turnovers, had four sacks and held the Generals to 171 yards of offense, the Pioneers dominated the game from the beginning. They scored on four of their first five possessions, built a 28-0 halftime lead and cruised home from there. The Pioneers have now won 14 straight league games stretching back to the beginning of 2012.

“It wasn’t easy,” insisted Weidman. “(Hamilton-Wenham) is physical and tough. Across the board their kids and coaches are competitive. They get them to play hard.”

This was supposed to be the first big test for Lynnfield after a series of contests against overmatched opponents and the Pioneers passed with flying colors.

“They got punched and they had to withstand that and they needed that,” Weidman said of his team. “They played hard right from the start and that’s what they needed to do.”

The Generals tried everything. They switched All-League tight end Nolan Wilson to tackle, went for it on fourth down twice on their first drive and tried an onside kick. They even dressed up their chain gang in face paint and kilts. None of it worked.

On the other side of the ball, Rondeau, Knee and Kevin Lee picked off interceptions, Steven White recovered a fumble and Lee, Rourke, Drew Balestrieri and Chad Martin all notched sacks.

The Generals made it into the Pioneer red zone only once to the 19-yard line and never threatened offensively. It was the Pioneers’ second straight shutout and third of the year. They’ve now allowed only 20 points in six games.

The Pioneers took control early when White recovered a fumble at the H-W 40 on the Generals’ second play of the game. Five plays later Sullivan hit Knee for a 29-yard TD strike. Dan Bronshvayg booted the first of his five PATs to make it 7-0. The junior has now converted 17 straight PATs in three games.

The Generals mounted their only real drive on their next possession, moving smartly from their own 31 to the Lynnfield 19 behind the running of Jimmy Littlefield. Lee ended the threat by picking off a Thomas Rostad pass at the 10. The Pioneers’ following drive ended when Sullivan threw his first interception of the season at the Generals’ 15. The defense forced a three and out and the Pioneers went on to score on their next four possessions. 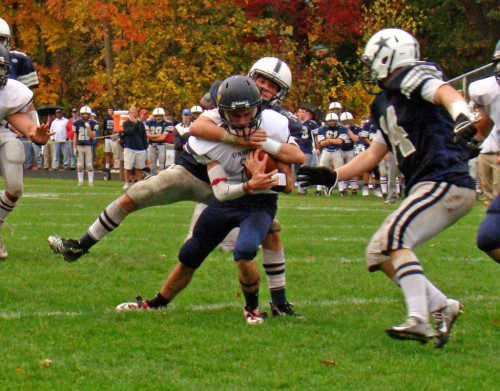 COLLARED. Drew McCarthy (1) is wrapped up short of the end zone on this third quarter carry versus the Generals Saturday.      (Tom Condardo Photo)

Rondeau ripped off a 53-yard jet sweep to make it 14-0 and a Sullivan to Knee 19-yard TD strike made it 21-0. Sullivan and Rondeau ended the half by turning what looked like a 20-yard sack into a 62-yard TD. Sullivan wriggled out of the grasp of a sure take down, rolled to the left and hit Rondeau at the 29-yard line. Rondeau then broke a tackle and tiptoed his way down the sideline for the score to make it 28-0.

The Generals recovered an onside kick to start the second half, but the drive ended when Rondeau picked off Rostad. Rourke plowed in from the 3 eight plays later to cap the scoring at 35-0.

“It’s great,” Weidman said of winning a third straight league title. “The best thing is the senior class. These seniors have had quite a run. We’ve been fortunate.”

The Pioneers return home for Senior Night when they’ll play Ipswich in their final CAL Baker Division league game before the playoffs begin the following week. Weidman knows there is still work to be done.

“You need the (power ranking) points so you can get the highest seed you can possible get,” Weidman said. “You also want to continue to play well. You don’t want to go into the playoffs not playing well.”

The Tigers were in a run for second place and a potential playoff spot but stumbled in a surprising 21-14 loss to Manchester-Essex last week.

“Ipswich is much improved,” Weidman said of the 2-4 Tigers. “They’ve been much better. They’ve run the ball great this year. They played H-W real tough and they beat Amesbury by the exact same score (33-6) as we did.”