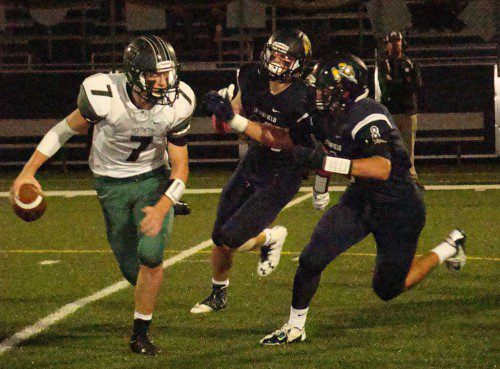 HOT PURSUIT. Captains Louis Ellis (85) and Kyle Hawes (8) zero in on Hornet QB Charlie Otterbein. Hawes would get there first to throw the QB for a 13-yard sack. (Tom Condardo Photo)

LYNNFIELD — Appropriately enough, on Columbus Day weekend, the Lynnfield Pioneers discovered their offense. After floundering for the first four weeks of the season, the Pioneer attack found its sea legs and sailed away from an undermanned Manchester-Essex squad 47-14 at Pioneer Stadium on Senior Night last Friday.

The Pioneers scored on seven of their eight possessions, punting for the first time at the end of the game when head coach Neal Weidman had emptied his bench. 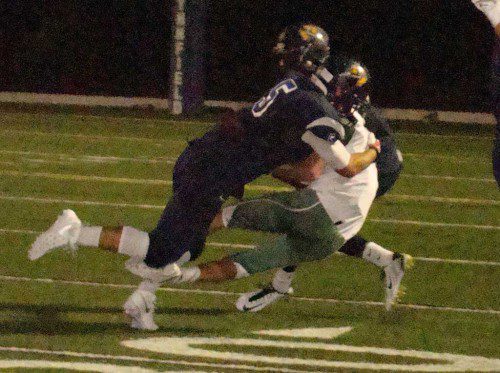 Last week it was the defense that put together a stellar performance in downing Ipswich, but this week it was the offense’s turn to shine. The Pioneers exploded for 524 yards – 354 rushing and 170 passing – their most since amassing 547 against Amesbury in 2014. Tyler Murphy (81 yards, TD), Nick Kinnon (68 yards, TD), Anthony Murphy (52 yards) and Mortellite (40 yards) led a bruising ground game.

Justin Ysalguez (107 yards) added the cherry on the top when he sprinted 72 yards for the Pioneers’ final touchdown. Mortellite’s record-setting performance keyed the passing game as he was 11 for 14 for 170 yards with the 3 TDs to Ellis and one to Tyler Murphy.

“We did some good things,” Weidman said of the win that ups their Baker Division record in the Cape Ann League to 3-0 and the team’s overall record to 3-2. “Match-up wise was probably a little better for us defensively last week and this week it was a better offensive match up for us.”

The victory marked the 23rd league win in a row for the Pioneers. It also sets up a chance for the team to capture its fifth straight league title when Lynnfield takes on Hamilton-Wenham in two weeks. And, it keeps them in seventh place in the Division 3A playoff race. 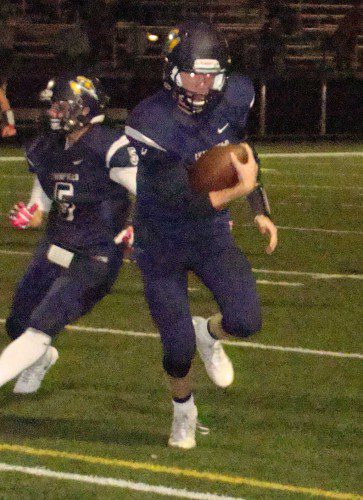 The Hornets, now 2-3 overall and 0-2 in the league, got off to a fast start by marching down the field on their opening possession to take a 7-0 lead. The Pioneers responded with 47 unanswered points. Kinnon tallied the first score on a 48-yard sprint down the left sideline. Freshman Liam Fabbri tied it with the first of his five PATs.

The Pioneers made it 14-7 three minutes later on a 51-yard Mortellite to Ellis pass. Ellis made an outstanding fingertip catch of the low pass and exploded through the M-E defense for the score.

“The first score was especially important,” said Weidman. “To be able to go right down and score after they took the lead was big. It gave us kind of a do-over. Then we got the defensive stop and scored again and we were able to settle in a little better.”

The Pioneers put this one away with three more first-half touchdowns – a 23-yard Tyler Murphy run and two more Mortellite to Ellis TDs, one from five yards and the other a beautiful teardrop pass in the end zone from 20 yards out.

“He’s certainly starting to get it,” Weidman said of his junior signal caller who has thrown for 727 yards, completed 64 percent of his passes, and has tossed nine TD passes with only three interceptions. “He went from playing in an I offense (at Malden Catholic) to a completely different type of offense here. So he had to learn that material in a couple of weeks. He’s coming along.”

The 12 seniors on the squad were honored Friday prior to the last regular season home game. Each senior came onto the field at the 50-yard line to a blue and gold balloon arch with his parents and presented his mom with a flower.

The Pioneers now have a week off to prepare for their final league game against Hamilton-Wenham and a possible playoff run.

“I think the bye week can be really good or really bad,” said Weidman. “We’ll find out. It will be nice for them to get a little time off to heal their wounds a little bit and then hopefully they’ll come out with a sense of purpose.”