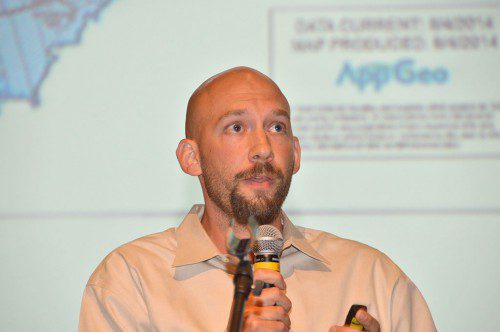 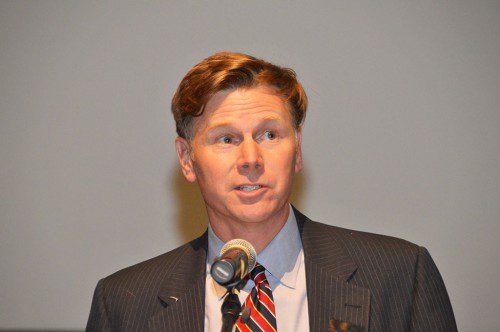 NORTH READING — In a “compromise” that failed to please most of the residents in the neighborhood, Town Meeting Monday night voted under Article 36 to rezone 15 parcels of land on Pluff Avenue and Fairway Road from Highway Business to Residence B zoning but only after excluding 4 Pluff Ave. from the zoning change, allowing it to remain in the business zone.

After over an hour of contentious debate, the meeting voted 77 to 44 in favor of an amendment by Tim Zanelli, 299 Main St., (written by his lawyer, Atty. Don Bornstein of Andover), to exclude 4 Pluff Ave. from the proposed rezoned district.

The meeting then voted 86 to 26, with the Selectmen, Finance Committee and Community Planning Commission all in favor, to rezone the other 15 parcels of land, all single family homes on Fairway Road and Pluff Avenue from commercial to residential, as petitioners wanted.

But 4 Pluff Ave. was always evening’s main bone of contention, as proponents argued that after purchasing the property Zanelli intends to expand his business on to 4 Pluff Ave.

“The purpose of zoning is to separate incompatible land uses,” said Seth Pasakarnis, 7 Fairway Rd., spokesman for the neighborhood petitioners. “This article is to preserve the residential integrity of the neighborhood.” He said the business at 299 Main St., which rents excavating equipment, is “disruptive to our neighborhood” because Zanelli’s business uses Pluff Avenue as a means of ingress and egress and the intent of the rezoning was to prevent the business from expanding in a “domino effect” on the street.

Pasakarnis noted that last Friday, plans were filed in town hall “in an attempt to stop what’s happening here tonight, a vote on this warrant article,” a reference to an ANR (Approval Not Required) plan filed that freezes the zoning on 4 Pluff Ave. for three years.

Pasakarnis said rezoning all 16 parcels, including 4 Pluff Ave. “is in the best interests of the public at large,” as well as the neighborhood, which is home to 21 children on a dead end street with one means of ingress and egress.

Representing Zanelli, Atty. Bornstein countered that 4 Pluff Ave. has been located in the Highway Business District since 1968 and Zanelli has agreed to purchase the property from Margaret O’Rourke, whose family has owned the land for many years and always expected to sell it as commercial property.

When Zanelli redevelops that property, he will need to go before the Community Planning Commission for site plan review, Bornstein said. “Mr. Zanelli believes he is in compliance with all the town’s rules and regulations and if he’s not the town should cite him rather than change the zoning,” Bornstein said.

“It would not be fair to Zanelli or Mrs. O’Rourke to rezone the property at 4 Pluff Ave. and leave it surrounded by commercial property, making it difficult to sell,” said Bornstein.

Pasakarnis objected to the amendment to remove 4 Pluff Ave. from the rezoning and urged voters not to approve. it. “Don’t take this away on the floor on a last minute legal maneuver, he said.

The 167 voters in the high school’s Performing Arts Center were sympathetic to the concerns of Pasakarnis and the other residents of Pluff Avenue and Fairway Road. But they also heeded the words of CPC member Chris Hayden, who noted: “The owner of 4 Pluff Ave. does not want to be rezoned.”

Debate on the article became quite heated at times and more than once Moderator John Murphy admonished both sides to avoid personal attacks and stick to the issue before the meeting – rezoning. “There’s a lot of new faces here tonight, and I think that’s great,” said Murphy. “You know what else I think would be great? If I saw these faces at the next town meeting and the meeting after that, not just for this article.”

When Selectmen announced their support, 3–2, for the amendment to exclude 4 Pluff Ave., Pasakarnis accused them of  “the ultimate flip–flop.”

Pasakarnis was frustrated because just two hours earlier, the Selectmen met before Town Meeting and voted 4–0 in favor of rezoning all 16 parcels, including 4 Pluff Ave. (Selectman Jeff Yull abstained).

Selectman Stephen O’Leary said that it was always the intention of the O’Rourke family to hold 4 Pluff Ave. for future commercial development and with the filing of the ANR plan, the O’Rourkes may very well have protected these plans for three years. When the Selectmen voted earlier that evening, they did not have the benefit of knowing the CPC recommendation, he said.

Mike Scannell, 44 Burroughs Rd. said he thought the owner of 4 Pluff Ave. should be able to sell to whomever she wants and he has confidence the CPC will perform due diligence when the new owners propose their plans for the “right kind” of business allowed under the zoning.

Warren Pearce, a CPC member for 23 years, said it’s never easy to have residential up against commercial of any kind. In this case, “you have to ask yourself if one group of people have the right to take away the rights of another property owner,” he said.

The rezoning article was the last piece of business for June Town Meeting and the hall emptied quickly following adjournment at 10:15 p.m.