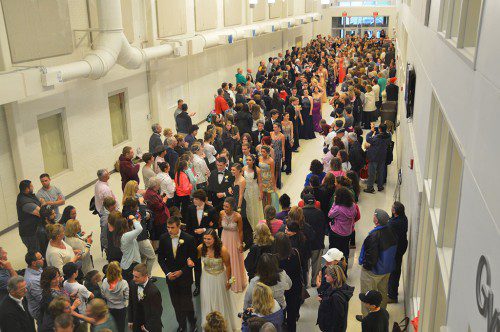 WHICH WAY TO TOWN MEETING? This was the scene on Main St. of North Reading High School Monday evening when the Grand March of the Senior Prom got underway at about the same time folks were filtering in for Town Meeting. This is only half the crowd there, estimated at 800–900 people. (Bob Turosz Photo)

NORTH READING — After all the months of hearings and late night meetings, after all the special Saturday sessions and compromises, after all the painful choices and a thousand trees killed to produce budget books that will henceforth be used mostly as doorstops, it all came down to this.

Town officials, who have been at work on the town’s spending plan for fiscal 2016 for over six months, have to be pleased with Monday’s Town Meeting results, which probably reflects confidence by the 167 voters in the high school’s Performing Arts Center that the Selectmen, Finance Committee and School Committee labored hard and did their best in producing a balanced budget that preserves town and school services going forward.

As Fin Com Chairman Abby Hurlbut said early in the meeting, “With increased revenues but with expenses that outpace those revenues, it’s been a difficult budget season,” and an onerous task to produce a balanced budget.

Most of the 10 minutes spent on the $65 million budget were taken up by the comprehensive presentation offered by Town Administrator Michael Gilleberto. The fiscal 2016 spending plan includes a $27.5 million school budget, (45 percent), a $14.1 million budget for general government (23 percent) and $19.6 million in fixed costs, (32 percent). The rest of the budget is made up in Enterprise Funds, such as the Water Department, Hillview and Parks and Recreation. After allowing for fixed costs, the town’s revenue was split 66–34 percent between schools and general government, Gilleberto said.

Key expenditure drivers in this budget include a $250,000 reserve set aside for snow removal costs, $125,000 set aside as a down payment on the town’s OPEB liability, the town’s $131,000 assessment from the Northeast Metropolitan Regional Vocational School and capital improvements worth $125,000. Health Insurance is the town’s second largest budget after the school department at $5.5 million.  Gilleberto said the town tested the market place in the last few months and is projecting a 1 percent premium reduction while surrounding communities are seeing a 6 percent increase.

Unanimous approval was also given to the town’s fiscal 2016 capital budget presented by Fin Com member Don Kelliher. The spending plan earmarked $3.3 million in spending – much of it through bonding – for the purchase and replacement of capital equipment for various town and school departments. Representative purchases approved included the town road program for $100,000, fire station improvements for $48,750, a new special education van for the school department at $35,000 and roof repair worth $25,000 at the Lakeside Boulevard water treatment plant.

The meeting also gave unanimous approval to $56,225 for the first two years of a herbicide and monitoring program at Martins Pond to combat Eurasian Milfoil, an invasive plant that has gained a foothold in the pond and is spreading. The appropriation will pay for two years of treatment to fight the Milfoil and the Selectmen have committed, if necessary, to supporting another three years of treatment.

Voters also unanimously approved Article 35, to accept a portion of the high school driveway to the rear lot line of 193 Park St. as a public way. This action closes out land transactions associated with the improvements at the intersection of Park Street and the high school driveway, where traffic signals were installed as part of the school project. Only 175 feet of land was involved in the transaction and Selectmen thanked the Gill family for their patience and cooperation.