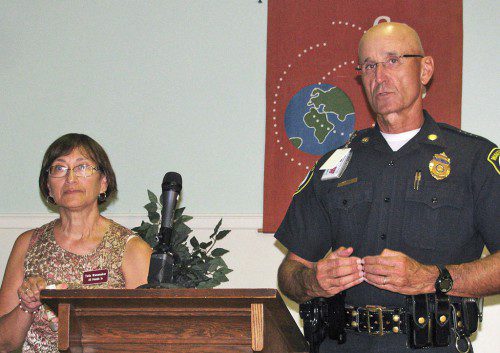 WAKEFIELD — “Wakefield is no different than any city or town in this country,” Police Chief Rick Smith told attendees at a forum on human trafficking and prostitution held at the First Baptist Church last night.
“We all deal with prostitution, we all deal with massage parlors and we all deal with human trafficking – whether it’s labor trafficking or sex slave trafficking,” Smith said. “Every country in the world deals with trafficking for sex.”
It’s a huge problem, Smith said, for law enforcement, communities and faith-based groups.
Smith noted that over the last couple of years, local police have received an increasing number of calls regarding massage parlors serving as fronts for prostitution. In prior years, he said, police would get calls from hotel managers or guests complaining of prostitution activities.
Smith stressed that many massage operations are legitimate and licensed to provide a valuable service. But when the state took over regulating massage therapy several years ago, he explained, it left loopholes in the law that have been exploited by the illicit operations.
When the complaints about massage parlors started, Smith said, police departments in different communities started discussing the problem and put together a task force. Eventually, undercover officers would be sent in to buy the service and then police would make an arrest.
Smith answered what he said was a commonly asked question: Why aren’t the men arrested along with the women in these situations? It’s because the men in these sting operations are undercover cops, Smith explained.
Smith said that most of the women in these operations are Chinese nationals who were brought here years ago. Smith said that arresting them is often the only way police can get them into the system and get them the help that they need.
He said that the women often have no identification and no legitimate means of supporting themselves, yet they might have $600 in their pockets. Smith observed that $550 of that would end up in the pimp’s pocket.
Smith talked about another measure that the town has taken to combat these types of operations, which was to send a letter out to the landlords asking them to be more responsible about the types of businesses that they rent to.
The response to what the town has done to date has been “phenomenal,” the Chief said, with some of these illicit operations leaving town of their own volition.
Many who are brought into sex slavery as young as 12-14 years old, Smith said. But it’s not just foreign kids, he stressed. Vulnerable kids, including children in this country are also targeted.
“Most of the women who become sex slaves are drug addicted,” Smith noted. Their pimps will give them enough drugs to keep them high and the rest goes into the pimp’s pocket, he added.
Even when arrested, the women are reluctant to give up the pimp, Smith explained. They have been so thoroughly brainwashed, he said, that they believe that the only person who really cares about them is the pimp.
Twila Wanamaker of “All hands In,” a non-profit organization dedicated to raising awareness about human trafficking, added that despite the abuse they endure, many of the women won’t come forward because of fear of the traffickers or because of a language barrier. She said that an estimated 14,000–17,000 people are trafficked unto the United States every year, half of whom are children. She said that 98 percent of sex trafficking victims are women and girls.
All hands In, Wanamaker said, advocates getting laws changed on behalf of trafficking victims and also works with survivors. Eventually, she said, the goal is to have a house for survivors of sexual exploitation and human trafficking in the Greater Boston area.
Laurel Gourville of the Wakefield Board of Health discussed ways that the Health Department is working to curb these types of illicit massage-type businesses.
She explained that when the state took over regulating massage therapists, it left loopholes in some areas like “Asian body work” that went unregulated.
She said that the board has been revisiting its old massage regulations with an eye toward regulating some of the other practices that have been exploited for trafficking and prostitution.
She said that just requiring all of these various types of holistic practices to come to Town Hall and register with the Health Department could go a long way toward discouraging the illicit ones from opening in town.
“We can’t license them but we can at least have a connection,” she said. The Health Department can also inspect the businesses for cleanliness, she noted, which can at least get someone from the town into the premises to see what’s going on.
Smith said that Wakefield is doing everything possible to eliminate sex trafficking and prostitution but also trying to help the victims.
“We’re working hard to see that those that need the help get the help,” he said, “and that those that are in a legitimate business are afforded the right to keep their businesses going.”