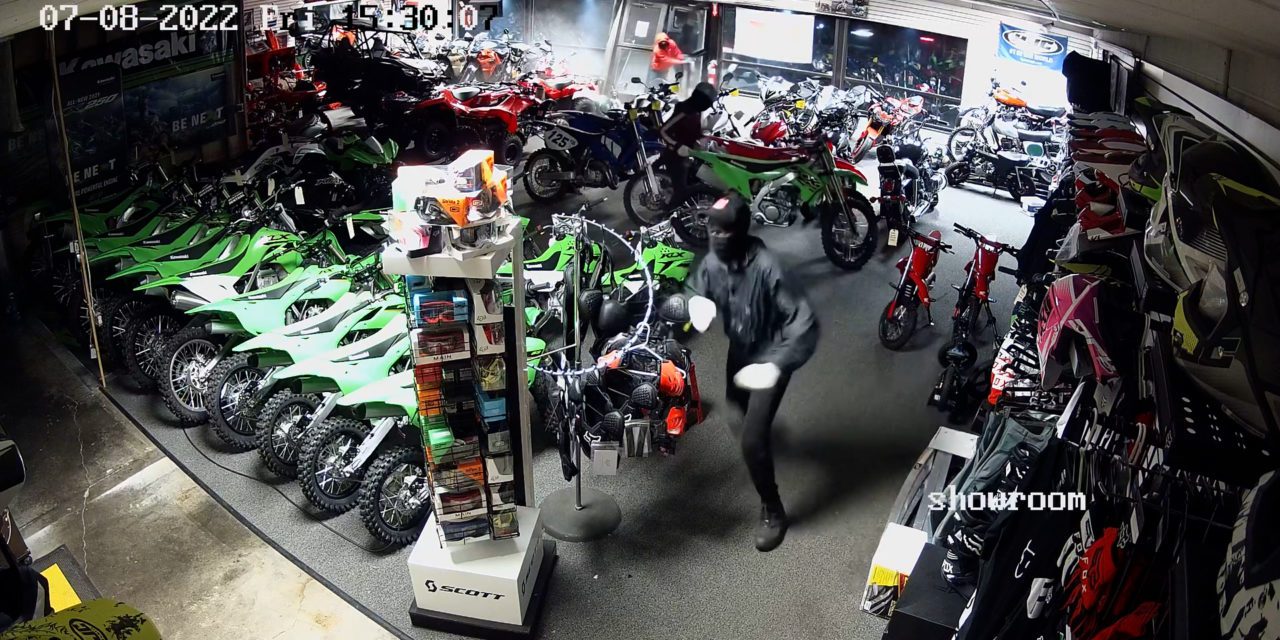 THE NORTH READING Police Department is investigating a break-in and burglary that occurred at North Reading Motorsports in the early morning hours on Saturday, July 9. (Courtesy Photo NRPD)

NORTH READING — The North Reading Police Department is investigating a break-in and burglary that occurred at North Reading Motorsports over the weekend.

According to Police Chief Michael Murphy, on Saturday, July 9, at approximately 3:30 a.m., a North Reading police officer observed a breaking and entering in progress at North Reading Motorsports, 49 Main St., while performing routine building checks in the area.

Upon arriving at the scene, the officer observed damage to the building’s front entrance. The officer also observed a male suspect allegedly fleeing the scene in a U-Haul cargo van.

The officer attempted to conduct a traffic stop, however, the suspect refused to stop and continued to flee at a high rate of speed north on Route 28. Due to the erratic operation and high speed of the fleeing cargo van, the officer terminated the pursuit.

Through a subsequent investigation, police determined that two motorbikes had been stolen from the store. Police believe that six male suspects were involved in the incident, five of whom fled the scene prior to the officer’s arrival.

Police determined that the damage to the store’s front entrance was caused after the suspects allegedly used the U-Haul cargo van to ram into the store to gain access inside.

On Sunday, July 10, Police located a black SUV in Lawrence with a stolen registration believed to be connected to the incident. Officers recovered one of the missing motorbikes inside the SUV.

The U-Haul cargo van also was located in Lawrence on Tuesday, July 12, and North Reading Police, working with Lawrence Police, determined that it had been stolen.

Police believe the suspects in this break are connected to several similar break-ins that have taken place throughout eastern Massachusetts and southern New Hampshire.

Anyone with information about the incident is asked to call the North Reading Police Department at 978-664-3131.

The incident remains under investigation by the North Reading Police Department and local and state law enforcement partners around the region, including the Lawrence, Beverly and Chelmsford Police Departments.

North Reading Motor Sports owner Fred Spinazzola told 7NEWS on Monday that the suspects, who were wearing masks, caused nearly $100,000 in damage to his business. He noted that the bikes were recently delivered from Japan.

“They’re coming in during these times when we can’t get the product we really need to provide the income for our families,” said Spinazzola. “And when we do get them and we have the opportunity to make a few bucks on them, they’re taken away from us.”

According to 7NEWS, similar thefts recently occurred at Cycles 128 in Beverly and Pike Cycles in Allston.