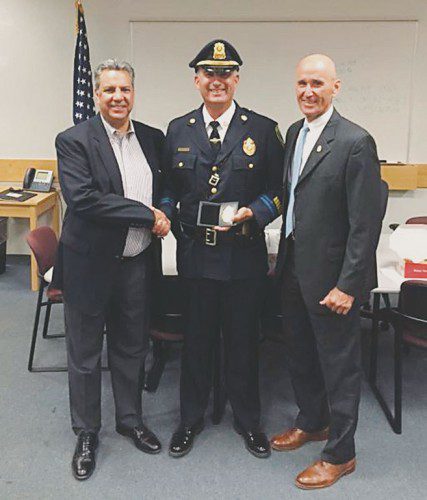 WAKEFIELD — The Wakefield Police Department would like to congratulate Sergeant Matthew Maglio on his retirement effective Sept. 15.

Sgt. Maglio has served as a Police Officer for over 32 years, beginning in 1984 with the Town of Danvers as an Auxiliary Officer. He was hired in 1987 as a full-time Officer with the Town of Lynnfield and finally transferring to Wakefield in 1994.

He worked as a Patrol Officer for 16 years and then promoted to the rank of Sergeant in 2010. During this time Sgt. Maglio was always looking for innovative ways of doing things, especially in the areas of security and technology. He was a Certified Emergency Medical Technician (EMT), a member of WPD’s bicycle unit and firearms unit and served on the N.E.M.L.E.C. Regional Tactical Patrol Force.

Prior to his promotion, Sgt. Maglio also held the position of School Resource Officer (SRO) at Northeast Metro Tech for several years.

“His dedication to policing and public service will be sorely missed and we wish him the very best in his retirement,” said Police Chief Rick Smith.