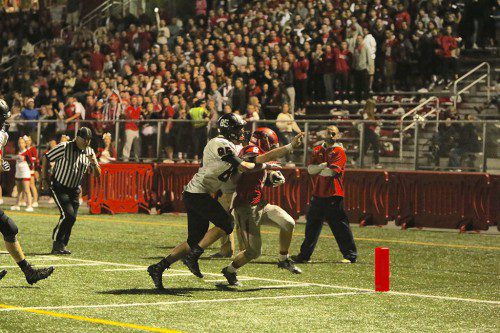 JOE MARINACCIO, a senior running back (#8) drags Marblehead defender Derek Marino (#85) on his first touchdown run of the game which was from 10 yards out. (Donna Larsson Photo)

WAKEFIELD — A good magician always seems to have another trick up his or her sleeve.

For the Marblehead High football team it wasn’t so much another trick but an extra gear.

The Warriors hung around for three quarters and trailed just by six points, 19-13, but the Magicians scored two fourth quarters touchdowns and went on to hand Wakefield a 34-13 setback on Friday night in the home opener at Landrigan Field.

The Warriors fell to 0-2 on the season after playing two very tough non-league foes, while Marblehead increased its record to 2-0.

Senior QB Drew Gally completed 11 of 15 passes for 91 yards with two touchdown passes and one interception. The Magician QB also rushed for 65 yards on eight carries and scored a touchdown. Gally also rushed in a two-point conversion attempt.

Marblehead senior RB Jason Lopez rushed for 137 yards on 12 carries and scored two touchdowns, one of which was on a 67-yard TD jaunt.

The Magicians put up 331 yards of total offense with 240 yards coming on the ground and 91 through the air.

Wakefield, meanwhile, was led by senior RB Joe Marinaccio on offense. Marinaccio gained 77 yards on 12 carries and scored both of the Warrior touchdowns. Marinaccio also completed one of two passes out of Wakefield’s “wildcat” formation.

Sophomore QB Mike Lucey completed 10 of 14 passes for 97 yards with one interception. But the sophomore was also sacked four times for 43 yards lost.

Wakefield had 135 yards of total offense with 44 net rushing yards and 91 through the air. Still, the Warriors hung around and made a game of it until the final quarter.

On defense, senior DB Alex McKenna led the way with eight tackles and had an interception return of 24 yards. Junior Alex Joly had six tackles and senior PJ Iannuzzi had five tackles. Iannuzzi also had a fumble recovery.

Wakefield got the ball first and went three and out. Marblehead’s first possession of the game resulted in a touchdown.

Starting at its own 25 after an illegal blocking penalty, the Magicians needed 11 plays to get into the end zone.

Gally completed first down passes of six yards to Bo Millett and 16 yards to Derek Marino to move the chains. Gally also completed a four yard pass to Justin Faia, but a spot penalty for holding pushed the ball back to the Wakefield 48.

Gally had a run of 16 yards on a second down and 14 play to pick up a first down. Senior RB Harry Craig, who had a run of seven yards earlier on the drive, gained another seven yards and caught a six yard pass to bring the ball into the red zone.

From the 19, Lopez gained four yards and then broke a 15 yard TD run for the score. Sam Paquette kicked the extra point to give Marblehead a 7-0 lead with 3:34 left in the first quarter.

Wakefield had good field position after a 23 yard kickoff return by Ryan Fitzpatrick as it began its next set of downs at its own 36. Marinaccio picked up a first down on a 15 yard run. But a five yard sack by Millett on second down resulted in long yardage and the Warriors punted the ball away on the final play of the first quarter.

On the first play of the second quarter, Lopez broke his 67 yard TD jaunt after he started to the left side and cut back over the middle, outracing the Warrior defense to the end zone with 10:44 showing on the block.

Wakefield was offside on the PAT attempt so when the ball was put at the one yard line. Marblehead opted to go for a two-point conversion instead. Lopez’ rush failed as the score remained 13-0.

The Warriors picked up two first downs on their next series as Carmen Sorrentino hauled in a five yard pass and Marinaccio caught a 10 yard pass from Lucey to bring the ball down to the Marblehead 37. But a bad snap resulted in a Millett recovering the loose ball for the Magicians at their own 42.

Gally fired an incompletion and then completed a pass to Marino. But Marino fumbled and Iannuzzi recovered the loose ball at the Marblehead 35. The Warriors needed five plays to get into the end zone.

After incompletion on first down, Marinaccio broke runs of 11 yards and one yard. Iannuzzi then caught a 13 yard pass to set up a first down and goal from the 10. Marinaccio took the ball into the end zone from the left side on a sweep to get Wakefield on the scoreboard.

Iannuzzi added the PAT attempt to cut the lead to 13-7 with 2:39 left in the second quarter.

Marblehead drove into Warrior territory after picking up a pair of first downs on a seven yard run by Lopez and a 14 yard reception from Craig. But on a second down and 13 play from the Wakefield 47, Gally’s pass was intercepted by McKenna and returned 24 yard to the Marblehead 40.

After a yard loss on a pass to McKenna, Lucey’s pass down the middle of the field was intercepted by Paquette as he took the ball away from the Warrior receiver at the eight yard line. The half ended with the Warriors trailing 13-7.

The Magicians opened the third quarter with a seven play scoring drive to take a 19-7 advantage.

Starting at its own 38, Lopez ripped off a 13 yard gain to bring the ball into Wakefield territory. Gally hit Faia with an eight yard pass and then Gally gained 28 yards on a QB keeper. After a holding penalty, Gally gained eight yards and Lopez ran for four. An incompletion set up a fourth down and eight from the Wakefield 11. Gally found Marino in the end zone for the TD.

The pass failed on the two point attempt, Marblehead maintained a 12 point lead with 8:34 left in the quarter.

The Warriors answered with a scoring drive of their own which covered 65 yards and took 11 plays.

Marinaccio gained a yard and then an intentional grounding penalty resulted in a third down and 20 from the Wakefield 24. That’s when Lucey completed a 34 yard pass to McKenna down the left side line for the first down.

After a procedure call and a Marinaccio incompletion, Ianzzuzzi gained a yard setting up a third down and 14 play. Lucey’s pass was tipped by a defender, but junior lineman Devin O’Brien made a heads up play by making the catch and gaining 12 yards to set up a fourth down and short. McKenna hauled in a five yard pass on fourth down as the Warriors had a first down at the Magician 28.

Lucey was sacked for a 10 yard loss by Sears Manning setting up a second down and 20 situation. Marinaccio broke an 18 yard run and Fitzpatrick forged ahead for four yards and a first down.

Marinaccio gained two yards on first down. On second down, the senior RB broke a 14 yard scoring run for Wakefield’s second TD of the game. The PAT attempt by Iannuzzi was short but the score was 19-13 with 1:21 left in the third quarter.

Marblehead’s next drive started at its own 43 after a 23 yard return by Faia after Wakefield kicked off from its own 35 as the result of an illegal substitution penalty. The Magicians mounted a five play scoring drive and scored within the first minute of the fourth quarter.

Lopez had an eight yard run, Gally gained four yards, and Marino caught a 10 yard pass as the third quarter ended. Lopez ran for nine yards on the first play of the fourth quarter and then Gally found Craig with a 26 yard TD pass.

Gally then ran in the two-point conversion to give Marblehead a 27-13 lead with 10:28 left.

Wakefield started at its own 23 after a fumble on the kickoff return by Marinaccio was recovered by Fitzpatrick. While the Warriors kept possession of the ball, they had their worst field position of the game.

Marinaccio was stopped for no gain on first down. Marinaccio then completed a pass to Fitzpatrick, but the play lost six yards setting up a third down and 16. Lucey was nearly sacked in the end zone for safety on third down as he was tackled at the one by Manning. As a result, Wakefield was forced to punt from its own end zone.

Pat Leary got off a 29 yard punt but the kick was picked up by Lopez and returned 26 yards setting up a first down and goal from the 5 for the Magicians.

Gally lost a yard on first down and gained four yards on second down. After an incompletion third down, Gally took the ball in from two yards out on fourth down. Paquette added the PAT to give Marblehead a commanding 34-13 lead with 5:41 left in the contest.

“We purposely went out and scheduled two tough football games to get us ready to play our league schedule,” said Cummings. “We felt this would help us more in the big picture than scheduling two teams that weren’t as strong. We wanted to find out who we matched up against good competition and see where we needed to get better.

“We’re now 0-0 in Middlesex League play,” added Cummings. “We have another tough team, Watertown, on tap.”

Wakefield begins play in the M.L. Freedom division on Friday night when it travels to Victory Field for a 7 p.m. game against at the Red Raiders.