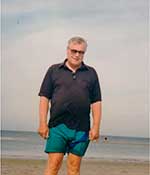 PEABODY — Raymond U. “Ray” Osborne, 87, of Brooksby Village in Peabody, passed away peacefully at home on Tuesday, June 21.
Ray is survived by his loving wife Esther (Cornwell). They recently celebrated their 65th wedding anniversary, but their lifelong romance was much longer.
Ray was a longtime resident of Wakefield and was the principal at Wakefield Memorial High for many years. He was a dedicated educator, beginning his career teaching history and taking on increasingly responsible positions. Before coming to Wakefield he was the principal at Quabog Regional High School in central Massachusetts.
Ray was the son of Edwin and Arlene (Raymond) Osborne. He was born in Weymouth on Oct. 6, 1928. He spent his childhood in Hanover with his brother Galen, who survives him. Ray graduated from Hanover High School, Class of ‘46.
In school he enjoyed his studies and playing football. A highlight of his high school career was quarterbacking the winning game for Hanover in the state championships.
He was a veteran of the Korean War.
Ray graduated from BU where he was a member of the Lambda Fraternity. Over the years he continued his education at Northeastern and got his master’s degree plus six in Education.
Ray had a lifelong passion for history and politics. He was always interested and well informed about current events and loved discussing politics. During his time in Wakefield, he was active in several civic organizations, including the Rotary, YMCA and the Citizens’ Scholarship Foundation.
Ray and Esther had three AFS students with them during their time in Wakefield. Muna, Timo and BK were not just visitors but became new family members.
Ray loved animals, especially dogs and cats. He had several much-loved pets over the years. He developed gardening interests when he moved to Brooksby Village. He and Esther had a lovely garden outside their apartment for everyone to enjoy.
Ray and Esther enjoyed many trips together and loved the ocean.
They visited a beautiful pond in Maine for several years and hosted many family members there.
Ray is survived by his wife Esther Osborne, now of Tewksbury; brother Galen Osborne of Hopkinton; sister-in-law Alice Ripley of Kingston; brother-in-law BJ Cornwell of Norwell and many nieces and nephews. He will be dearly missed by all of his family and extended family.
Relatives and friends are invited to his memorial service and to join in the celebration of his life on Thursday, July 7, at 11 a.m. at the McDonald Funeral Home, 19 Yale Ave., Wakefield.