Red Raider lax takes a win, has eye on playoffs 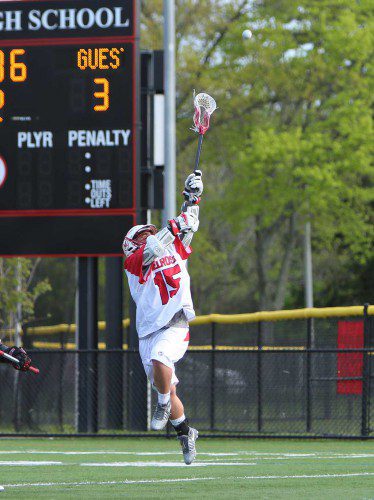 CALVIN WHITE is airborne for the Melrose boy’s lacrosse team who took an easy win over Watertown on Tuesday, 19-8. (Donna Larsson photo)

MELROSE — The Melrose boys’ lacrosse team earned their 11th victory of the season with a 19-8 victory over the Watertown Red Raiders on Tuesday at Fred Green Field in Melrose. The win is a nice bounce-back after two tough losses against Winchester and Wakefield last week. Melrose remains 11-5 with two games left on the regular season schedule and currently are poised to be seeded somewhere around fourth in the Div. 2 North bracket.

Melrose coach Matt James credited the team for their win against Watertown, particularly the performance of their goalie. “Connor Locke has played awesome. He’s really practicing hard and it shows. Jack Wells, a sophomore, has also turned into a force on the field.”

Offensively Melrose counted on a variety of Melrose attackers on Tuesday including Jack Siebert (4 goals), Jack Mandracchia (3 goals) and Ryan McDermott (2). The night also marked the first ever varsity goals for Justin Auger and Joe Colozzo.

“It was a good win for us, we’re working through some injuries which has affected our midfield but it’s given our sophomores an opportunity to step up,” says James. “We had 12 transition goals today and I’m happy with that.” Melrose’s brush with injury may have had a hand in their back-to-back losses against Winchester (18-11) and Wakefield (14-11) last week but Melrose was back to their old habits by Tuesday.

With playoffs approaching James wants to focus on defense. “I’d like them to be a bit more stingy and hold teams to a lower amount of goals and get the ball out of the defensive zone more quickly. They’re gaining confidence so that’s a good thing. And we have a lot of depth to our offense, that’s definitely a strength. Opponents won’t know which way we come at them.”

Melrose will get a taste of post season competition when they face undefeated Beverly (17-0) on Wednesday (post deadline).