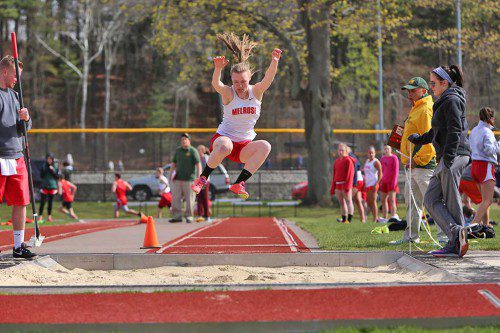 AMONG THOSE who topped the pack at the 2016 Andover Booster Meet was long jumper Ann Morrison, who captured first place among statewide competition. (Donna Larsson photo)

MELROSE — It was sun filled day at Andover High School for the 2016 Andover Boosters Meet, where top high schools in MA competed in outdoor track. Both the boys and girls MHS spring track teams ran with successful results, including two first place victories.

The girls’ team, coached by Trevor Rudolph, earned 20 points for an 11th place finish. Leading the team were Anne Morrison in the long jump, who prevailed over all competition with a 16-08.50 reach, besting her closest competitors from Newton South and North Reading. Senior captain Elizabeth Hirsch also topped all competition in the two mile, running 11.18.42, a good distance from her closest competitor from Newton South who ran 11:32.40. Among those who reached finals in their events include Maddie Hughes in the 800, Molly Clark and Bianca Jean in the discus and shot put and Emily Donovan and Sarah Denning in the triple jump. Melrose has a tradition of success in the high jump and that continued with the work of Haley Moss (5-00.00) and Emily Donovan (4-10.00) who advanced to finals and placed 7th and 10th respectively. Also competing were Brooke Barriss and Emily Bertolaccini (110 dash) Isabel Castro (200 dash) and Holly Cohan in the mile.

On the boys’ side coach Tim Morris’ team placed 15th with 14 points thanks to some fine distance running and sprints.

Making a name for himself was freshman Issac Seide who advanced to finals in the 100 dash with a 6th place finish at 11.39. Adam  Cook and Robbie Hanlon were a fierce pair in the two mile run. Cook placed second overall with a time of 9:52.64 and Hanlon was fourth at 10:17.13. Sean Conlan landed near the top in the 800 meter, placing 6th with a time of 2:02.68 while teammate Will Hanlon clocked in with a 2:11.78.  Advancing to finals in their events were John Lavina, Griffin Barriss and Joe Brach (400 dash), Nick Chan and Liam Rittenburg in the high jump, Chan in the triple jump, Adam Caffey in the javelin and Steve Stromski in the mile. Teammate (and current Div. 3 State Champ) Kevin Wheelock placed 10th in the mile with a time of 4:34.14.