Crushing loss at Gillette after Melrose falls to Dartmouth, 14-7 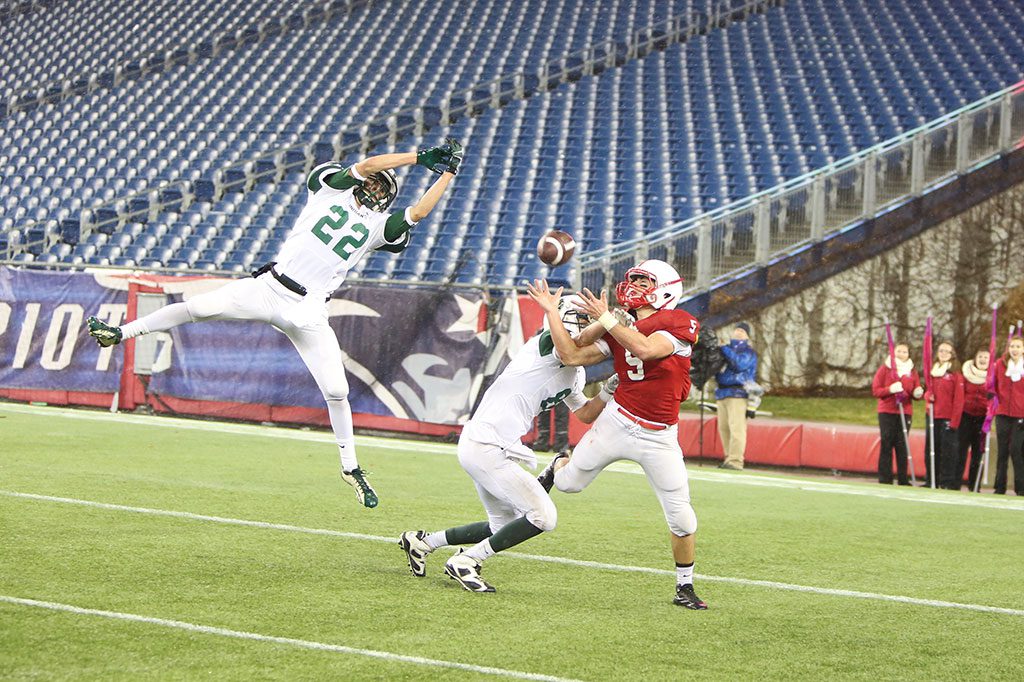 IT WAS a highlight reel moment for Melrose’s Mike Pedrini when he caught this bomb from Melrose quarterback Jake Karelas at the Div. 3 Superbowl at Gillette Stadium. It set up Melrose’s only touchdown in the 14-7 loss.  (Donna Larsson photo)

MELROSE — Under the lights of Gillette Stadium playing in a torrential downpour, the Melrose Red Raider football team was not going to let the elements deter its dreams of capturing the city’s first state title in football. But it wasn’t windswept rain that destroyed its chances, instead the tough defense of the Dartmouth High School Indians, who beat Melrose on Saturday Dec. 6 at the Division 3 Super Bowl in Foxboro in a hard-fought 14-7 battle.

Melrose (10-3) was making their first appearance at Gillette Stadium since 1982 and was hoping to secure its first ever state championship. For coach Tim Morris’s Red Raider football team, that elusive hunt for a championship continues.

Dartmouth (11-2) secures its first Super Bowl championship after having made its last appearance in the Big Show in 2007. The Indians played as advertised with a juggernaut running game and tough defense, which helped put Melrose down 14-0 in the first quarter alone. The Raiders reversed course in the second quarter and for the duration of the game, clamping down on the Indians to keep it scoreless while knocking on the door several times in an attempt even it up. That included orchestrating a two minute drill which ended in an interception into the arms of Dartmouth’s Jakob Rose delivering the Dartmouth victory with just 23 seconds left in the game.

“This was a great season and I’m so proud of these guys,” said Melrose head coach Tim Morris after the game. “We kept fighting, we responded well to adversity. This whole season the team has bounced back after being banged up. It was a tough road and they fought hard.”

Melrose had no answers for Dartmouth junior Chris Martin, the Indians’ 5-foot-8, 150-pound running back who rushed for a massive 215 yards on 31 carries. Martin helped the Indians roll past Melrose defense on the opening drive for 73 yards on 12 plays which culminated in a Dartmouth touchdown by Martin with 4:51 left in the first. With Melrose down 7-0 that seemed to set the tone for the night, leaving the Red Raiders chasing points. The Raiders went three and out on their first three possessions of the game, with Tim Morris and his quarterback Jake Karelas (5-16, 63 yards) having to reconsider a tossing game due to the elements. A steady rain only persisted to near-monsoon conditions as the game progressed.

“Our plan was to throw on them,” said Morris. “We also knew our special teams would be big too and we looked to block punts, but the rain made that harder – so we improvised.”

With 1:25 left in the first quarter, Dartmouth quarterback Blaine Almeida (7-10, 88 yards passing) and receiver Alex Tisdelle led Dartmouth on a 63 yard drive and into the end zone again with a 12 yard touchdown to to give Dartmouth a larger 14-0 lead, suggesting it might be a long night for Melrose. At the end of the first, Dartmouth led on offense 118 yards compared to Melrose’s 4. Things appeared to be going from bad to worse in the second when Melrose committed its only fumble of the season, turning the ball over on their own 27. At first and goal on the 4, Chris Martin found the end zone but a holding call against Dartmouth killed that touchdown and the Indians were forced to try for a field goal thanks to Melrose’s Zac Mercer who knocked Martin at the 2 yard line. The missed field goal was a welcome relief for Melrose, who seemed ready to finally respond.

From there, Red Raider Jack Hickey (78 yards on 19 carries, 1 TD) made a statement, letting fans know the game wouldn’t be a blowout. From the Melrose 20 he connected on a series of Karelas passes including a 23 yard shot given clearance by Melrose’s Zack Mercer and Brian McLaughlin. Hickey ran for a first down to the Dartmouth 48 before sophomore Mike Pedrini took over. Pedrini rushed for two first downs against a tough Indian defense to the Melrose 34. At fourth and six on the 30 Melrose was desperate for a score to keep the game from getting away, and sure enough Karelas launched an impressive pass to the far right edge of the end zone. The 5’10 180 lb Pedrini fought off three defenders, including 6’3 Jakob Rose, to come up with the ball on the 1 yard line, flipping upside down in the process. The incredible catch made for a highlight reel moment on the televised broadcast and set Hickey up with an easy 1 yard touchdown with 40 seconds left in the half. A good point after by Melrose’s Mike Cusolito made it a new game at 14-7 with an entire second half to play.

“I think after the first quarter we were able to contain them once we made adjustments. In the beginning of the game we had to catch up to the speed of the team,” says Morris. “They’re big up front and their run game was very strong.” 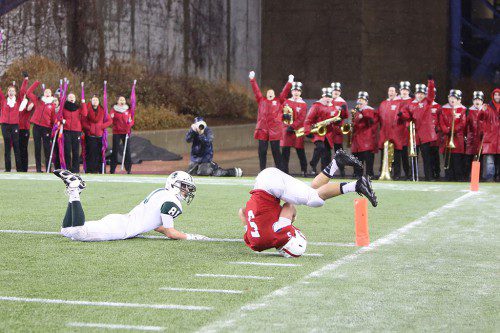 IT’S WAIT until next year for the Melrose Red Raider football team who fell short to Dartmouth High School, 14-7 at the Div. 3 Superbowl on December 6 at Gillette Stadium. Pictured is Red Raider sophomore Mike Pedrini with an impressive catch for Melrose which set up their only touchdown. (Donna Larsson photo)

Those adjustments helped Melrose keep Dartmouth scoreless for the rest of the game. But one factor that may have hurt Melrose’s chances of coming up “the big play” was the loss of Mike Pedrini, who took the brunt of Dartmouth hits in his eye-opening catch in the second. “Mike was having visual problems and head pain, he does get migraines, so Mike being out after that hurt us,” comments Morris. “He always comes up with the big plays. Toward the end of the game our running was stalled a bit. We put a lot of Jack [Hickey], he was tired. Not having Mike certainly made it harder to come back.”

Melrose’s Will Caffey was the ultimate playmaker for Melrose with several highlight reel moments. With less than 10 seconds on the clock and the first half coming to an end, the wide receiver single handily prevented an easy Dartmouth touchdown with an open field tackle on Marley Dembitzki, throwing him down on the 2 yard line as the clock expired, saving the game for the moment. Caffey later prevented another touchdown when he hunted down Chris Martin who charged untouched into the end zone. Caffey sprinted from across the field, tackled and stripped the ball for a fumble, which gave Melrose possession and yet another chance for a comeback. Caffey, a state medalist in the 200 meter, made every use of his speed and it set up a two minute drill in the final minutes of the game. “Will has always been fast but this season he’s developed this confidence that made him so effective,” says his coach. “The whole playoffs he’s been so great for us. He always does everything he can to keep us in a game and to win them.”

Melrose received the ball in the second half and managed to get to the Dartmouth 22 on a series of 15 plays and five first downs behind the legs of Hickey and keeper runs by Karelas. But at fourth and six on the 22, Melrose came up empty which ultimately hurt them. Dartmouth took over on downs, but the two teams swapped possessions, with Melrose defenders Cam Hickey and Ryan Feeney helping to force the Indians to punt. By the start of the fourth Melrose was still down 14-7. The game was not over but it needed that one big play. Meanwhile Red Raider Zack Mercer was an animal on defense, making several key tackles that served well for Melrose. “Zack played a tremendous game. He played his guts out, he was just so determined out there,” says Morris.

In the fourth, Dartmouth’s Chris Martin had a 20 yard run that brought Dartmouth to first down on the Melrose 25. But a penalty on the Indians brought the ball back to the 40. On the next drive Martin broke through Melrose defenders and was off to the races. In a 51 yard sprint, Martin was seemingly untouched into the end zone when Caffey chased him down out of nowhere and stripped the ball at the 10 allowing Melrose’s Christian Pizzotti to recover. This set up a two minute drill for Melrose with 2:34 on the clock and one time out left. Pizzotti came up with two passes to bring Melrose to the 22 and, on fourth and two, Jack Hickey took a pass for a first down to its own 34, with 1:05 on the clock. A pass to Andrews and a one yard run by Hickey gave Melrose a first and 10 scenario on its own 44 with 23 seconds left. On second and 10 on the 46, Karelas lobbed a rainbow pass across the field, on the edge of the end zone, intended for Will Caffey. It was a beautiful pass and thrown to the right candidate but it was broken up by Dartmouth’s Marley Dembitski and landed in the arms of his teammate Jakob Rose, who slid on the ground with the ball, effectively giving them the victory. As the clock expired, jubilant Dartmouth players mobbed the field in celebration.

And so, the Cinderella season of the Melrose Red Raider football season finally came to a close without the coveted trophy. After so many magical moments this season it seemed almost unusual to see a game escape. Melrose coach Tim Morris, however, expressed nothing but admiration for the team’s efforts. After the game he told his team as much. “I told them they should hold their heads up, because in true Melrose football spirit, they fought every minute of that game. I feel nothing but pride in that.”