A 16 win season ends after loss to Winchester in semifinals 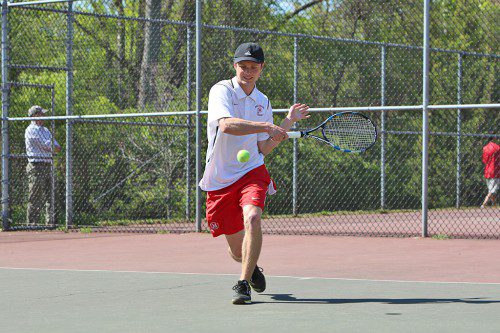 MELROSE—It was an epic season for the members of the 2015 Melrose High Boy’s varsity tennis team who who outperformed competition by going deep into a postseason that nearly had them competing for a Div. 2 North title. On Monday, June 8 that playoff ended with a 5-0 loss to a perennially strong, #1 seeded Winchester squad on the road at Winchester Tennis and Swim Club.

The loss brings Melrose’s season tally to 16-5, certainly the best record for the club in recent memory. Two of those wins came last week in efforts against North Andover and Gloucester, teams they beat in opening round and quarterfinals to advance them to face the 13-2 Sachems.

For Melrose coach Matt Williams, this spring was nothing but a thrill ride. “This has been a great season, and we’re proud to have gotten to the first ever semifinal appearance.”

For the first time in recent memory, Melrose hosted a playoff match at the Crystal Street Courts in Melrose and edged North Andover, 3-2. Competing in singles were Julian Nyland (1st) Jack Mays (2nd) and Rowan Dempster (3rd) and in doubles, Liam Brown and Joe Hughes (first) and Brian Canzanello and Sam Stallings (second). This successful lineup would make up most of the playoff roster over the next week, and against North Andover, Melrose enjoyed wins from Jack Mays (6-4 5-7 7-5), Brown/Hughes (3-6 6-3 7-5), and Canzanello/Stallings (6-3 6-4).

Of course, facing a behemoth like Winchester on Monday seemed an uphill battle going into the match at Winchester Tennis & Swim Club. It also seemed the two presumed favorites, Winchester and Wayland, would once again meet each other at the Div. 2 North finals like they have the last few years. Still Melrose sent their seasoned players to the court in Julian Nyland, Jack Mays and Rowan Dempster in singles and Brown/Hughes and Canzanello/Stallings in doubles. Melrose was swept 5-0 but saw some points earned. Julian Nyland played his rival to scores of 6-0, 6-2 and Mays 6-1, 6-1. In doubles Liam Brown and Joe Hughes fell 6-3, 6-0 and a hard fighting Canzanello and Stallings fell 6-3 and 7-6.

Realistically, one could not presume Melrose to go further then they did, and in the process, Melrose put together possibly the best boy’s tennis team MHS has rostered. After a 16 win season, coach Matt Williams has nothing but pride for his team, who graduates four seniors: Rowan Dempster, Liam Brown, Brian Canzanello and Joe Hughes.

“It’s been a great ride,” concludes the coach. “We’re going to miss a few of our top seniors but having starters like Julian, Jack and Sam back along with others will keep us very competitive next year.”