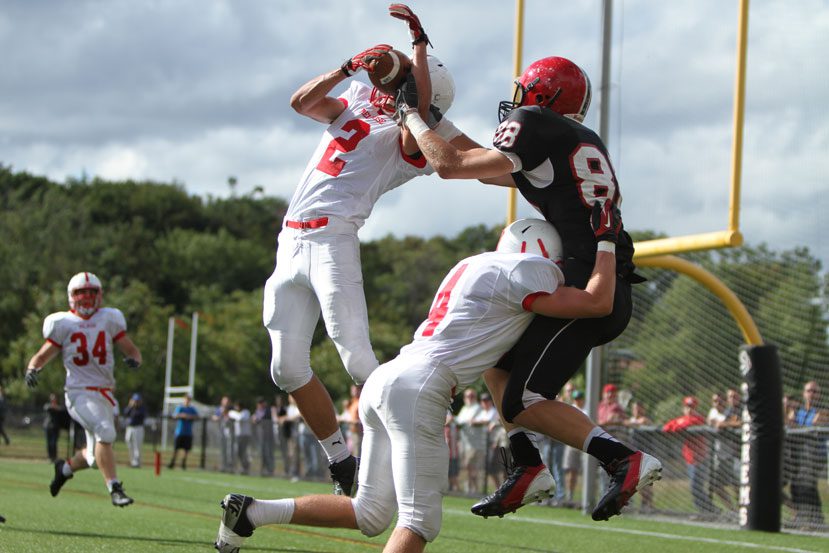 MELROSE — After a joyride 2013 season the Div. 3 Northwest champion Melrose Red Raider football team should have no trouble filling the stands this season. On Sept. 12 the reigning league champs open their season with a target on their back when they travel to Masconomet for a non-league road game. Their season opener is Friday, Sept. 19 at 7 p.m. against Winchester.

According to Melrose head coach Tim Morris, the well-conditioned Raiders are ready to hit the ground running after a productive off season.

“A lot of our players who return are three sport athletes,” says Morris. “They run, they lift … we’re happy with the conditioning over the school year.”

Gone is quarterback Malik Garrett (now playing at Bridgewater State) and All-Scholastic/League MVP Eric Mercer (St. Anselm) but the Red Raiders are prepared to fill skilled positions with ball handlers with plenty of game experience under their belts.

Senior Jake Karelas will call signals for the Raiders. The 6’0” 175 lb. former JV quarterback has seen QB action in pre season and is ready both physically and mentally. “Jake is a senior and has experience on the team,” said Morris. “As a quarterback he knows how to run offense.”

Among the senior leaders who’ll drive the Red Raider’s campaign include their tri-captains Jack Hickey, Zack Mercer and Chris Devir. “They are a good core of seniors, the right group to guide the team,” comments Morris.

Expect Hickey to be a major player on offense. The 6’0” 207 lbs. running back has been one of Morris’ best weapons in the last two seasons. Also expect fellow captain Zac Mercer to be a play maker. The senior missed nearly an entire season last year but the multi-sport athlete could be potent on the field along with senior wide receiver Christian Pizzotti.

Alex Slabacheski will see plenty of time on offensive line. The senior will man the ship as one of the few returning linemen on the team. Despite defensive adjustments look for steady play from Devir, Jessie Gauvain and Mike Doucette. Brian McLaughlin also returns after a strong 2013 season at outside linebacker.

Look for good action from senior wide receiver Will Caffey, a state-qualified runner in track. “Will’s a good overall athlete and can really run,” says his coach.

Colby Andrews proved to be a weapon for the Raiders in 2013, particularly in playoffs. Look for the wide receiver to become another favorite target for Karelas. Special teams is seeing some change but Andrews will continue his role in punt returns while PAT attempts should be booted by Mike Cusolito.

As far as the competition, the Middlesex League may be up for grabs. Wakefield, Burlington, and Reading may find themselves looking to refill positions after losing All Star seniors. Once again Melrose will see scheduled games against Middlesex Freedom League opponents in rapid succession.

The new MIAA playoff schedule remains, meaning playoff determination will decided by late October after Melrose plays one game each against Wilmington, Watertown, Wakefield, Burlington and Stoneham. Last year the system worked wonderfully for the Raiders, who took the Freedom League and marched their way to Div. 3 Northwest glory.

Of course, returning from one of their most successful years in recent memory can carry expectations for Melrose but for coach Morris, it’s a new season. “Last year was a special year. We had great senior leaders … but every team is different. Our success last season will certainly give us confidence coming in, but every year you start over. We’re focused on the future.”