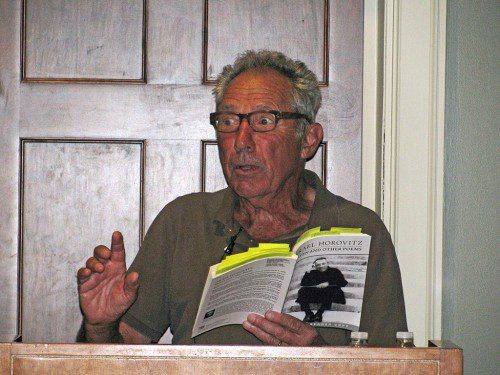 WAKEFIELD — “I don’t think I’m very special,” Israel Horovitz said. “I really don’t – I never have. I think that my experience is human experience and if I’ve felt that pain or that joy, somebody else has too.”

Horovitz spoke last night to a crowd of more than 70 local fans who packed the Beebe Library Lecture Hall to welcome home not just a favorite son but an internationally acclaimed playwright, screenwriter, film director and now, a published poet.

Horovitz, who grew up on Elm Street and graduated from Wakefield High School in 1956, read from his just published book of poetry, “Heaven and Other Poems.” He also talked about his career as a playwright, his long relationship with the great Irish expatriate writer Samuel Beckett, directing his latest film, My Old Lady (starring Kevin Kline and Maggie Smith) and, of course, his hometown of Wakefield.

Horovitz read dozens of poems from his new book, often providing a few words of explanation and background to help give the poems context.

Several of the poems in the book are long and poignant, such as “Stations of the Cross.” Others are short and funny, like the “Dieter’s Prayer, which consists of just two lines.

For I have thinned.

Before reading “Mother’s Garden” Horovitz related the time that he had helped his mother, Hazel Horovitz, pick out some flowers for her to plant in her garden. It was during the 17 year period, he said, when his mother was consumed with caring for her husband Julius, Horovitz’s father, who suffered from Parkinson’s Disease. When Horovitz returned a week or so later, he said, the flowers were still unplanted and dying. The opening lines of the poem describe his mother’s reaction.

She attends the daily withering

and is strengthened by the boundless wanting

yet her spirit breaks completely

weeps the passing of the pansies

still unplanted for the want of time-out

Horovitz got a knowing laugh from the audience after he finished reading the poem, “Boston,” which ends with these lines:

“You blink once, and summer’s done;

Twice, and they bury you.”

Another poem, “This Annoying Love,” also struck a chord with many in the audience.

I would clear my life

Of this annoying love

But you would surely fly

Horovitz read a poem he wrote for his two youngest children, twins Hannah and Oliver, entitled “For Ollie and Hannah’s 10th Birthday.”

Some twins named Amanda and Eddie

Ate a meal of cement and spaghetti

Damaged their dentures quite drastically

Horovitz later answered questions from the audience related to his poems, his plays and his movies.

Asked about his plays set in Wakefield, Horovitz admitted that some of the longer Wakefield plays “are really pretentious. I was just out of grad school and they were absolutely filled with literary allusion.”

Horovitz said that he much prefers his shorter Wakefield-based plays, like The 75th (about a Wakefield High School reunion with just two surviving classmates) and Hopscotch.

Horovitz talked about his father, who was a truck driver until age 50, when he decided to go to law school and become a lawyer.

He was also asked about his relationship with Beckett, whom he first met in 1968. The two writers remained friends until Beckett’s death in 1989 at age 83. Horovitz explained that Beckett had no children of his own but took an interest in young writers. Horovitz said that he was not the only one that Beckett took under his wing in this fashion, noting that the playwright Tom Stoppard was another.

Horovitz also talked about his lifelong love affair with France. He described his play, My Old Lady, and the feature film upon which it is based as a kind of love letter to France.

“I really loved France and France just gave it back,” he said. “I’ve had maybe 50 of my plays translated and performed in France and there are probably 10 plays running there tonight.

“And I’m a truck driver’s son from Wakefield, Massachusetts,” Horovitz said. “So it’s a miracle, really.”