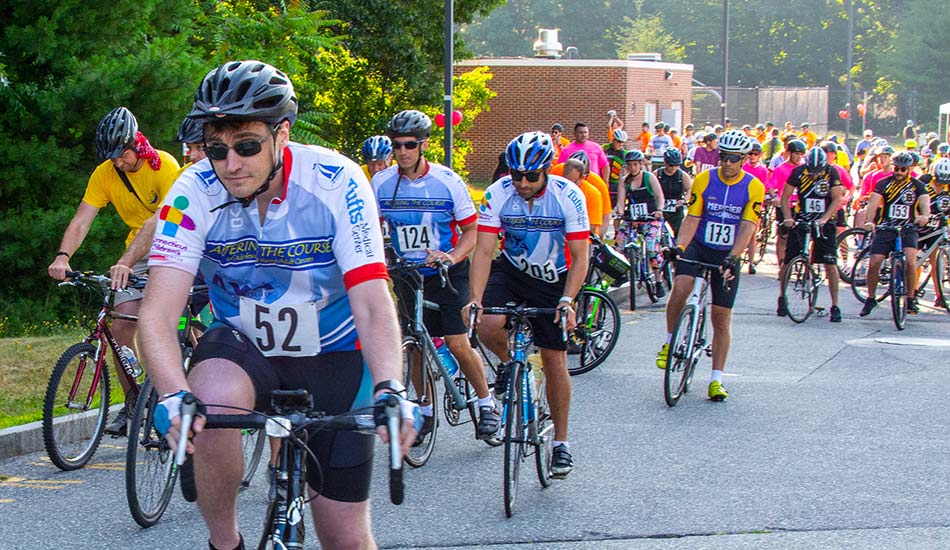 Reid R. Sacco AYA Cancer Alliance Executive Director Lorraine Sacco said the over $200,000 raised during the fundraiser made this year’s ride the most successful event since it began in 2005. In addition to raising funds for the alliance, Reid’s Ride honors the life and legacy of LHS graduate Reid Sacco, who passed away in April 2005 after a courageous two-year battle with soft tissue sarcoma. 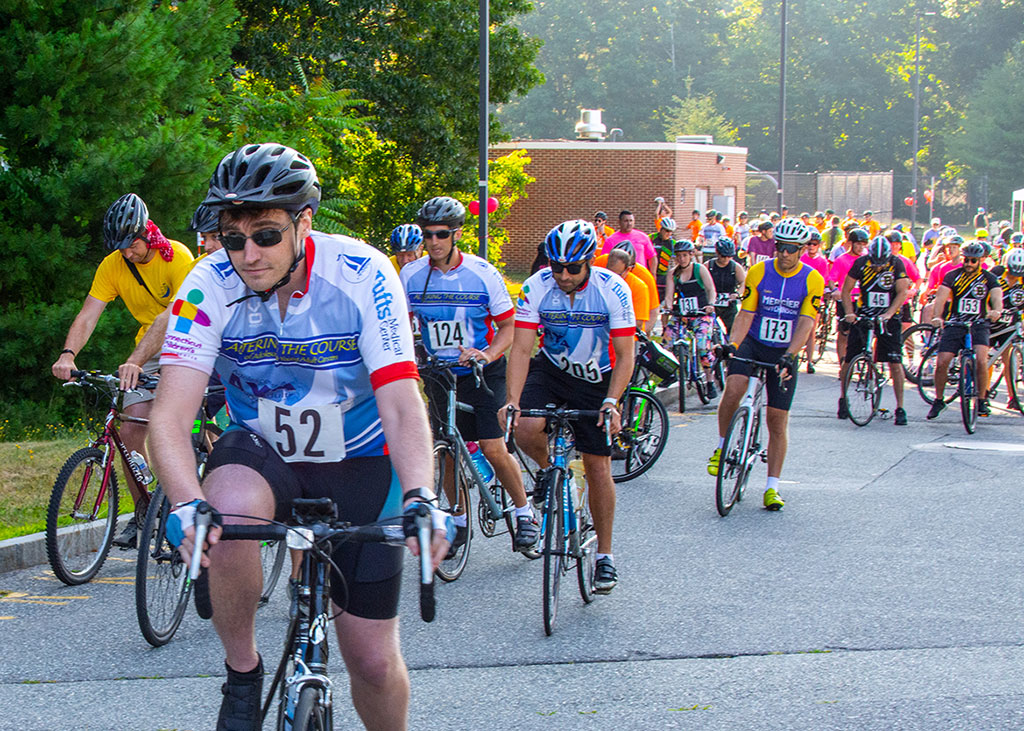 OVER 200 CYCLISTS begin the 28-mile trek from Lynnfield High School to Stage Fort Park in Gloucester during the 18th annual Reid’s Ride bike-a-thon on July 17. The fundraiser raised over $200,000. (Lauri Priestley Photo)

“The 18th annual Reid’s Ride hit it out of the park,” said Sacco as she addressed several hundred people who gathered around the gazebo at Stage Fort Park in Gloucester. “We broke all Reid’s Ride records for fundraising and turnout of riders, volunteers and supporters today!”

“The top honors for fundraisers who did not ride for a team were Weston Sacco, Liana Boghosian, Robert Marra, Jessica Moore and Michael Marra,” said Sacco.

Sacco said the alliance anticipates that the over $200,000 raised during the 18th annual Reid’s Ride is “expected to swell as additional donations and company matches to teams and individuals continue to come in during the next several weeks.”

“The Reid’s Ride website will remain open until October so that supporters can make post event tax-exempt donations to their favorite teams, favorite riders or to the event itself,” said Sacco.

Sacco said the reason why the 18th annual Reid’s Ride was so successful is because the “cause resonates with so many.”

“They recognize just how effective and steadfast the alliance has been in changing the course of history for AYA cancer,” said Sacco. “Our cause, our efforts and our results have touched the hearts of cancer patients, cancer survivors and their families everywhere.”

Sacco recalled that the alliance was forced to hold two consecutive virtual Reid’s Ride fundraisers due to the COVID-19 pandemic. She noted that the theme for the 18th annual Reid’s Ride was, “Riding toward a future that is cancer free.”

“Even in the face of a pandemic, the Reid R. Sacco AYA Cancer Alliance never slowed down,” said Sacco. “It continued to evolve in reach and impact into something beyond the ride. When we started the AYA Cancer Alliance 18 years ago and held the first Reid’s Ride, our dream was to make a revolutionary impact on the lives of adolescents and young adults diagnosed with cancer. That dream has come true.”

“Reid’s Ride is symbolic of the road cancer patients and their families must take to beat their cancer,” said Sacco. “For them, there always seems to be another mountain to climb and another battle to fight. Not only has the alliance dedicated itself to making each climb easier, it is driven by its mission to win the battle against AYA cancer once and for all.”

“Sophia was the perfect mix of spunk, sass and smarts, constantly her throwing her head back and laughing or making me laugh,” said Ella. “She was also incredibly brave — and brave in a way that told you right away that she just didn’t know any other way to be, which is what happens when you fight medulloblastoma three times like Sophia did before she passed away at the age of 12. We rode to keep Sophia in our minds and the minds of others, to honor of the way she bravely fought brain cancer, and to support the Reid R. Sacco AYA Cancer Alliance’s efforts to fight AYA cancer.”

Sacco recalled that she told Kathryn in a text message before the ride that, “This year was the most inspirational for us and for many.”

“Ella’s determination as she trained for this day, in honor of her friend Sophia, energized all of us,” said Sacco. “Kathryn texted me back and said, ‘that’s the culture you created! An opportunity to support, mourn and celebrate all at once.’”

Sacco said another rider told her that he participates in Reid’s Ride because he knows the alliance is “an all-volunteer organization and that every dollar donated will reach the patient in one form or another.”

The alliance also recognized longtime resident Arthur Bourque and his family for supporting Reid’s Ride for the last 18 years.

“Arthur, his wife Joan and their daughters, Katie and Jackie, have volunteered tirelessly and without hesitation in every capacity possible at Reid’s Ride and all alliance events since 2005,” said Sacco. “But few people may know that it was Arthur’s expertise as a businessman, a public servant and a leader of several charitable causes which gave Gene and I in 2005 the courage and guidance to tackle the complexities of a fundraising project as ambitious as Reid’s Ride. It’s a testament to the support that Arthur and his family has given us that we have been holding Reid’s Ride annually for 18 years, longer than I think we ever imagined.”

Reid’s Ride has been the primary fundraising event for the Reid R. Sacco AYA Cancer Alliance, an all-volunteer organization that the Sacco family established after Reid passed away in 2005.

“The ride started as an idea of Reid’s,” said Sacco. “He envisioned a bike ride fundraiser to help young adults like himself navigate the uncharted waters of AYA cancer. He wanted other adolescent and young adult cancer patients to know instantly where to go and who to see for expert care and treatment of their cancer. During his battle with sarcoma from 2003 to 2005, he and other adolescents and young adults diagnosed with cancer encountered all manner of gaps and barriers in seeking and finding the short-term and long-term medical care they needed. It turned out that adolescents and young adults diagnosed with cancer fell tragically into a gap between pediatric oncology and adult oncology. The implications were catastrophic.”

Sacco recalled that, “Survival rates in cancer patients between the ages 15 and 39 were far worse than those in children and older adults.”

“And, unlike these same two groups, improvement in survival rates for adolescents and young adults had not improved in decades,” said Sacco. “One barrier standing in the way of progress was the fact that adolescents and young adults were almost universally ineligible for clinical trials because trials typically recruited only pediatric patients, adult patients or patients with more common cancer types. Adolescents and young adults fortunate enough to survive their cancer faced additional hurdles and barriers. These adolescent and young adult cancer survivors often found it impossible to resume their education, set out on careers, recover from debt accumulated from uninsured hospital and treatment costs, to start families of their own, and to find primary care that could provide the specialized long-term health monitoring they need.

Sacco said “many” of the challenges adolescent and young adult cancer patients face “have been successfully removed” over the last 18 years.

“The Reid R. Sacco AYA Cancer Alliance is responsible for much of that success,” said Sacco. “The Reid R. Sacco AYA cancer programs at Tufts Medical Center and at Connecticut Children’s Hospital were among the earliest adolescent and young adult cancer programs in the country and, today, remain two of the most innovative and comprehensive programs nationally and internationally.”

Sacco thanked all of the riders, donors, volunteers, supporters and sponsors for making the 18th annual Reid’s Ride fundraiser a huge success.

“The ride and all of its riders, donors, volunteers, supporters and sponsors have given the AYA Cancer Alliance the opportunity to facilitate the emergence and development of AYA oncology as its own area of medical practice, and one that is increasingly integrated with pediatric and adult oncology,” said Sacco. “We never imagined we’d make such a revolutionary impact for this and future generations of adolescents and young adults diagnosed with cancer.”