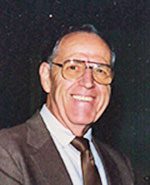 NORTH ANDOVER — Rev. Joseph Simone, 91, of North Andover and formerly of Andover for many years, died at his home on Tuesday, Aug. 4, 2015. He was the beloved husband of the late Mary H. (Rezendes) Simone, who died in 2012.

He was a retired Congregational Minister (United Church of Christ), serving churches in Rhode Island, North Carolina and Massachusetts. He later worked as an English teacher and guidance counselor for the Wakefield Middle School. He also served in the U.S. Coast Guard Auxiliary for 15 years as an instructor and as an assistant staff officer, from 1993 to 1998.

Joseph was always there for others. His life’s purpose was to create unity among all people. He was passionate about what he believed in. He loved life and his family. He was constantly growing and learning each day. He never stopped wanting to become a better person. He enjoyed reading, writing, photography, his computers and the Bible. He also loved his chocolate and ice cream.

His funeral was held at the Martins Pond Union Baptist Church, 4 Cogswell Rd., North Reading on Monday, Aug. 10 at 1 p.m. Visitation was held at the Croswell Funeral Home, 19 Bow St., North Reading, prior to the service. In lieu of flowers memorial donations may be made in his memory to: American Cancer Society, P.O. Box 22718, Oklahoma City OK 73123. www.croswellfuneralhome.com.