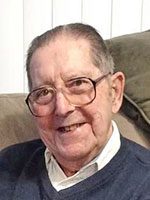 MANCHESTER, CT — Robert Cook Daniels, beloved husband of the late Louise (Huntress) Daniels, died peacefully in Manchester, Connecticut on Saturday, October 17 at 1:15 a.m. with his niece by his side. He was mentally alert and vibrant through his final day, enjoying time every day with family. He was so happy he glowed when enjoying visits from his dog, Daisy, or coloring or puzzling with his great-grand niece and nephew.

Born in Melrose, Massachusetts in 1923, Bob lived on Keniston Road with his parents and his sister Barbara. Bob attended Winthrop School, Coolidge School and graduated from Melrose High School in 1940. He then attended Mount Herman in Mount Herman, Massachusetts as a post graduate and played football, hockey and lacrosse, graduating in 1942. For seven months he worked as a draftsman, enlisting in the U.S. Navy in January of 1943. After boot camp in Newport, RI, Bob went to U.S. Naval Air Training School (NATS) in Memphis, Tennessee, graduating from NATS as Aviation Ordinance Man, 3rd Class. He joined anti-submarine squadron VB141 and spent the rest of his service flying anti-submarine patrols in the U.S. and the Caribbean, receiving an honorable discharge in January 1946 as Aviation Ordinance Man, 2nd Class.

Next, Bob attended Boston University, attaining a Bachelor of Science degree. In 1951 Bob was hired as a traffic engineer at New England Telephone Company, and in June married Louise Huntress. He worked in Boston while Louise taught school in Saugus. The telephone company transferred him to Manchester, New Hampshire where he worked for six years, building a home there, and making many good friends. They enjoyed happy times with friends and family in Manchester, and at family cottages at Rye Beach in Hampton, and on the Cape in Falmouth, Massachusetts. The telephone company transferred him to Burlington, Vermont where again Louise and Bob made many good friends.

The next company transfer in 1964 returned Bob and Louise to Melrose, Massachusetts where they lived happily on Apple Hill Road for 40 years, active in their community and family life. In 1964, they also started vacationing annually in Florida in Ormond Beach and then Naples’ Vanderbilt Beach, enjoying many happy times with friends and family members. Bob retired from NET&T in 1983. He was on the Melrose Board of Health for many years and was a 62-year member of Wyoming Lodge, A.F. and A.M.

Hugely loved, he was known as “Uncle Bob” to generations of family and friends. A gentle and kind soul, childrenA and animals were drawn to Uncle Bob like magnets. He could whistle bird songs, dogs were convinced they needed to lounge in his lap, and he always had a treat for the squirrels, seagulls, pelicans and fish. He had the gift of play, and was never too busy to do a puzzle, play a game, coordinate a penny hunt, dig for sand fleas at the beach, build sand castles or go sledding down the golf-course hill. He had a great sense of humor, loved to go fishing, enjoyed watching sports, and loved to travel with his beloved wife, Louise, to FL, across the U.S., to family parties, recitals, graduations, weddings, birthdays and more. Incredibly humble, he was a voracious reader, crossword-puzzler and lifelong learner. He had boundless patience, a wonderful sense of humor, and was always thinking of others before himself, even in his final days. He was a steady, loving force in this world for 92 years and is deeply missed.

Bob was the dear brother of Barbara Allen of Westboro. He was the cherished uncle of Beverly Russo and her husband Randy of Ellington, CT, William C. Huntress, III of Melrose, Barbara Tresness and her husband Greg of Manlius, NY, Charles Allen and his wife Meryle of Upton, and Robert Allen and his wife Judy of Fairfax, VA. He was the loving great uncle of Rick Russo, Sarah Pashe, Tyler Huntress, Caroline Huntress, Colby Tresness, Tysen Tresness, Graham Tresness, Lynne Allen, Robert Allen, Christopher Allen and Beth Allen. He is also survived by 5 great-grandnephews, and 1 great-grandniece.

Relatives and friends will gather in honor and remembrance of Bob’s life at Robinson Funeral Home, 809 Main St., Melrose for his Funeral Service celebrated on Friday, October 23 at 11 a.m. Interment with military honors presented by the U.S. Navy will follow at Wyoming Cemetery, Melrose. Honor Bob’s memory with a contribution to the ASPCA, PO Box 96929, Washington, DC 20090 or the charity of your choice.