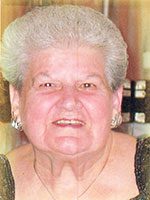 MALDEN — Barbara J. (Wyeth) Carozza, 88, of Malden and formerly of Melrose, died at the Bear Hill Nursing Center in Wakefield on Oct. 12.

Barbara was born and raised in Melrose and attended Melrose schools. She was a homemaker and resided in Malden for most of her life.

Barbara was a member of St. Mary Church in Melrose and enjoyed playing bingo, dancing and trips to Foxwoods and Atlantic City.

She loved to attend the annual trip to the U.S.S. Missouri Convention and was a former member of the Lt. Norman Prince Drum & Bugle Corps in Melrose.

Barbara was the beloved wife of the late Alexander Carozza for 32 years. She was the loving mother of Linda A. Christoforidis and her husband Dimitrios of Nahant, James M. Carozza and his significant other Jeanmarie Cataldo of Malden and Robert P. Carozza and his wife Karen of Saugus. She was the caring sister of George Wyeth of Nw York, Marie Whelpley of Florida and was predeceased by seven siblings. She was cherished grandmother of eight grandchildren, five great-grandchildren and several nieces and nephews.

Visitation was held at the Gately Funeral Home, 79 West Foster St., Melrose, on Friday, Oct. 16, from 9:30 to 11 a.m., followed a funeral service in the funeral home at 11 a.m. Burial in Holy Cross Cemetery, Malden. In lieu of flowers, contributions may be made in Barbara’s name to the American Cancer Society, 30 Speen St., Framingham MA 01701.