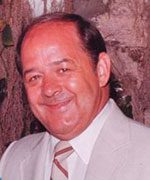 Robert was born in Somerville on June 25, 1931 to George and Lillian (Mayo) Wedge. He was raised in Somerville and attended Somerville High School before enlisting in the United States Army at the age of 17. Not long after his time in the Army, Robert married the love of his life, Joan S. (Stevens) Wedge. They had four children together and raised their family in Malden.

Robert worked for Cain’s Potato Chips for many years before retiring. He also enjoyed to golf and meeting his friends for their daily cup of coffee. Robert was a simple man who loved to be with his family. He would try and make everyone of his children’s or grandchildren’s events. Whether it was traveling to Aruba and the Cape, or just having a party in someone’s backyard, Robert was happiest when he was surrounded by his family. He will be greatly missed by all of his family and friends he has left behind.

Robert was the beloved husband of Joan S. (Stevens) Wedge. He was the loving father of Donna R. Murray and her husband Paul of Malden; Sharon L. Brancato and her husband Joseph of Newburyport; Robert G. Wedge and is wife Sharon of Everett and the late Stephen R. Wedge. He was the cherished grandfather of Paul, Kimberly, Carissa, Robert, Krista, Nicholas, Alexander and Tyler. He also leaves behind eight great-grandchildren. He was the caring brother of Dorothy McGrath of Wilmington; Marion Kelley of San Diego, Calif.; Richard Wedge of Billerica; Paul Wedge of Charlestown; Carol Tiberii of Everett; and the late George Wedge; Walter Wedge and Barbara Hayward. He is also survived by many nieces and nephews.

Visitation was held on Thursday, Aug. 6 at the Gately Funeral Home in Melrose, from 8-9:30 a.m. A Mass of Christian Burial was held following the visitation at St. Joseph Church, 790 Salem St., in Malden. Interment with military honors was held immediately following the Mass at Holy Cross Cemetery in Malden. In lieu of flowers contributions can be made in Robert’s name to the Melrose Veterans Relief Fund, 562 Main St., c/o Veterans Office, Melrose MA 02176. To leave an online condolence and for additional information please visit gatelyfh.com.