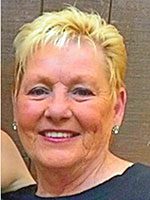 Judy was born on Jan. 3, 1946 to John and Helen (Howard) Falter. She graduated from Somerville High School and went on to marry Richard Aylward. They had four children together and raised their family in Malden. Judy was a wonderful mother who was always there for her children and she never missed any of their sports games growing up. In addition to raising her family, Judy also worked as a clerk at Lechmere Sales in Cambridge for many years. As her children began to have children of their own, Judy decided to retire early and help raise her grandchildren. She could always be seen with them around town, whether it was going for walks, picking them up from school or attending their sporting events. She could be a very vocal spectator at her grandchildren’s games and was proud of all of them beyond words.

In addition to being a passionate grandmother, Judy loved her weekly Saturday trips to Foxwoods Casino with friends or even on her own occasionally. She also loved traveling to Atlantic City as well as Aruba. Judy was very family oriented, she was happy anywhere as long as she was surrounded by family. She remarried later in life to Paul McCormick. Although their time together was short, they had a very loving relationship and cherished the time they had together. For eight years Judy battled cancer with dignity, never complaining. Later in her life Judy was blessed with another grandchild, Milania, although Judy only had two years with her, she loved her time with her taking walks in the stroller she had bought. Judy will be greatly missed by all who knew her.

Visitation was held at the Gately Funeral Home, 79 West Foster St., Melrose on Saturday, Aug. 1. A Mass of Christian Burial was held following the visiting hours at St. Mary Church in Melrose. Interment was held immediately following the Mass at Cambridge Cemetery. In lieu of flowers contributions can be made to the MGH Yawkey Center, Mass. General Hospital, 55 Fruit St., Boston MA 02114. To leave an online condolence for the family and for additional information please visit gatelyfh.com.