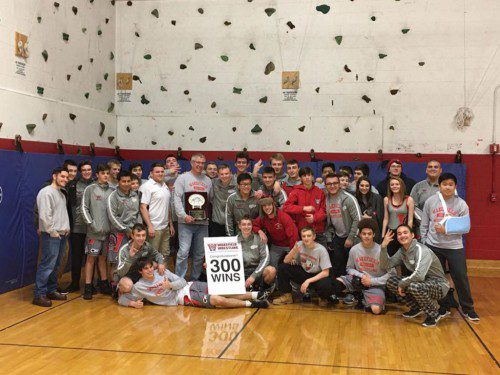 WATERTOWN — The 2016-17 season couldn’t have started any better for the Warrior wrestling team.

Not only did Wakefield get two wins on Saturday in a double dual meet at Watertown High School but its longtime coach Ross Ickes earned his 300th career victory in the process.

The Warriors took down Taunton and Carver by scores of 42-33 and 42-27 to kick off the year in style.

For Ickes, he ended last season with 298 career wins and had to wait until this beginning of this season to get 299 and 300. At least he didn’t have to wait long this year as he reached the milestone right away.

In the meet against Taunton, Wakefield won seven of the 14 weight classes. However six of them were by pin which made the difference.

Nolan O’Callahan, a sophomore, accepted a forfeit at 120 for Wakefield’s first point. But then Aidan Armstrong, a sophomore, was pinned by Taunton’s Josh Grasso at 2:57 of the 126 bout.

At 132, Jake Goodchild, a junior, pinned Cam Billadeau at 2:25 of the 132 weight class, while at 138, junior Kendall Hiltpold accepted a forfeit for six more points for the Warriors.

Wakefield then won the next three matches by pin. At 152, junior Ryan Smith defeated Dom Pittman at 1:17. At 160, senior captain Ben Piercy took down Brandon Defortis at 58 seconds. At 170, junior Kevin Tran pinned Alex Simon at 3:57.

James Connors, a senior, was pinned by Tiger Nuno Camara at 1:05 of the 182 weight class.

In between, Taunton’s Woudanly Danger accepted a forfeit at 220 which meant the meet came down to the last bout which Denham won.

The Warriors may be dealing with some issues and have some wrestlers out. But that certainly didn’t matter against Carver as Wakefield accepted five forfeit wins with two weight classes not even contested.

Armstrong, freshman Brock Johnson and Goodchild accepted forfeits at 120, 126 and 132.

Spicer and freshman Steve McDonough both lost by pin at 138 and 145. Spicer was defeated by Ronnie Oliver at 1:47. McDonough was taken down by Skylar McSweeney at 1:07.

There was no contest at 170, while Connors and freshman Sam Valenti accepted forfeits at 182 and 195.

Coleman lost a 7-2 decision to Brian Delvige at the 220 weight class and Denham was pinned by Tyrone Santos at 2:58 of the 285 bout.

There was contest at 106 as Wakefield and Ickes celebrated the 300th career win milestone.

Wakefield hosts Essex Tech in a nonleague meet tomorrow night at 7 p.m. at the Charbonneau Field House. It’s also the home opener for the Warriors.