Involved in aerobics until her late years 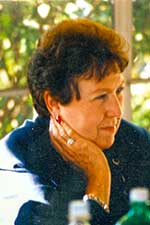 Born in Alabama on June 12, 1922 she was the daughter of the late Robert E. and Molly (Bayne) Cartee.

As a child Mrs. Powell was raised and traveled throughout the south with her family. She resided in Tennessee, Arizona and New Mexico before graduating from Russelville High School in Russelville Alabama.

She married the love of her life George Powell of Reading, in October 1941, and raised four children residing in Greenwood, and Lynnfield for over 70 years.

Mrs. Powell worked as a sales consultant for Fashion – Two Twenty and Lady Finelle Cosmetics for over 40 years where she was awarded two cars for sales excellence.

A member of the First Baptist Church of Wakefield since 1952, Mrs. Powell volunteered for many committees and positions with her church family. She was a member of the Wakefield Choral Society for many years. She was involved in aerobics until her late years and loved cooking for her family and planning big events and holidays.

She was the beloved wife of the late George F. Powell. She was the loving mother of Gary R. Powell and his wife Emily of North Reading, Cheryl L. Powell of Lynnfield, George L. Powell and his wife Lori of Londonderry, N.H., and the late Ronald R. Powell. She was the mother-in-law of Neva Powell of Haverhill. She was the sister of Earl Cartee and Ann Creasman and her husband Beacher of Al., and the late Harold Cartee. She was the grandmother of Jocelyn Neukuckatz, Laurie Hogan, Leslie Taylor, and Gary L., Scott, Adam, Jake, Andy, Matthew, Joseph, and Kristina Powell. Also survived by 13 great grandchildren and five great great grandchildren; as well as her sister-in-law Chris Cartee of FL., and many nieces and nephews.

Her funeral service will be held in the First Baptist Church, 8 Lafayette St., Wakefield on Wednesday at 10 a.m. Interment to follow at Puritan Lawn Memorial Park in Peabody. Visitation for relatives and friends will be held at the McDonald Funeral Home, 19 Yale Ave., Wakefield on Tuesday from 4-8 p.m.