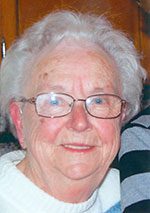 Born in Wakefield, July 8, 1931 she was the daughter of the late Peter and Anna (DeVeau) Malonson.

Ruth was raised and educated in Wakefield. She was a member of St. Joseph Church. She enjoyed baking, crossword puzzles and was an avid reader. Ruth was a former employee of Guillow’s and Mystic Industries.

Her funeral will be held from the McDonald Funeral Home, 19 Yale Ave., Wakefield on Friday, Sept. 4 at 9 a.m. followed by a Funeral Mass in St. Joseph Church, 173 Albion St., Wakefield at 10 o’clock. Visitation for relatives and friends will be held at the funeral home on Thursday from 4 to 8 p.m.