Owner and operator of Executive Office Suites in Peabody 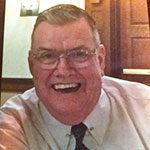 LACONIA, N.H. — Charles F. Morrison, 70, of Laconia, N.H., formerly of Malden, passed away Aug. 27. He was the beloved husband of Anita (Brindamour) Morrison and the father of David Morrison and his wife Jennifer of Latham, N.Y., Amy Steede and her husband Dan of Waltham and Jessica Donovan and her husband Kyle of North Reading. He was also the grandfather of David, Lexi, Ally, Brendan, Sean, Andrew, Sophie, Ella, Maeve and Evie and the brother of Richard Morrison of Ohio, Leonard Morrison of Hanover, Mary King of Florida, Kevin Morrison of Medford, Paula Morrison of Yarmouth, Leslie Morrison of Wakefield, Nancy Smith of Bradford and the late Theresa Morrison. He is also survived by many nieces and nephews.

Charles was a graduate of Malden High School and the Massachusetts Military Academy. He served in the National Guard where he rose to the rank of First Lieutenant. He was the owner and operator of Executive Office Suites in Peabody for many years. He formerly owned and operated Energy North, a company that specialized in the development of energy saving equipment. He is a past president of the Belmont, N.H. Rotary Club and was a coach for the Malden Recreational Hockey Program for several years. He was an avid Boston sports fan and enjoyed playing golf. Charles also enjoyed music and singing with his brothers and sisters. Funeral services were held from the Breslin Funeral Home, 610 Pleasant St., Malden on Tuesday, Sept. 1 followed by a funeral Mass celebrated at Immaculate Conception Church, 600 Pleasant St., Malden.

In lieu of flowers, donations in his memory may be made to the Central New Hampshire VNA, 780 North Main St., Laconia NH 03246.