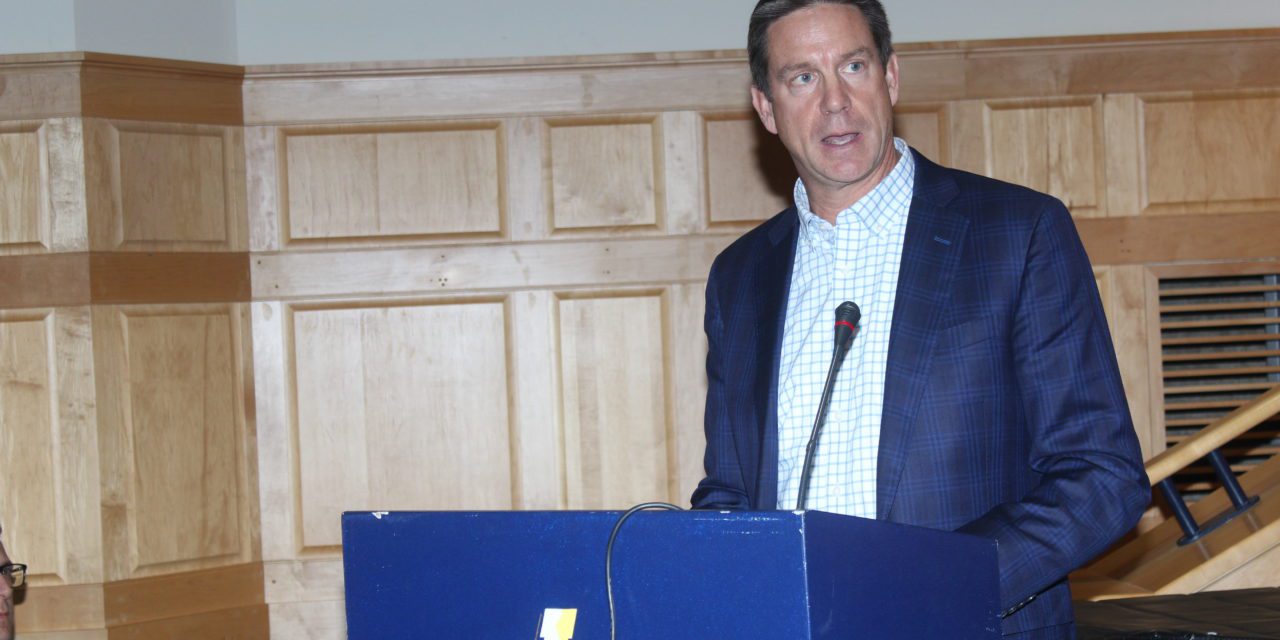 Sagamore Spring Real Estate Trustee Richard Luff gave an overview of Articles 6 and 7 to Fall Town Meeting, which he called a “win-win” for the trust and the town. He said Article 6 requested the legislative body to approve amending the Zoning Bylaw’s definition for an Elderly Housing (EH) District to allow detached units and amenities such as a clubhouse. He said Article 7 requested Fall Town Meeting to rezone the eastern side of the golf course from Residence D to Elderly Housing, which would allow Toll Brothers to construct an over-55 development comprised of 66 units.

Luff addressed several rumors that were included on a flyer that had been circulating around town. He said one of accusations included on the flyer claimed that the zoning changes would apply to every residential neighborhood.

“This is false,” said Luff. “The requested Zoning Map change would allow for an Elderly Housing Zoning District only on the 36 acres owned by the trust. It would not apply to any other part of town.”

Luff also noted that the flyer inaccurately claimed that the trust was looking to building 136 units.

“The development agreement we signed with the town limits the project to 66 units,” said Luff. “The development would be served by an on-site wastewater disposal system. As such, the maximum wastewater flow that is allowed is 10,000 gallons per day, which limits the development to no more than 66 units. We have not stayed in business for nearly 100 years by committing to one thing and doing something entirely different.”

Luff also addressed some residents’ claims that the trust was “bluffing” about its threats to close the golf course. If Fall Town Meeting rejected the two proposed zoning changes, he said the trust would sell the golf course to a developer who would construct 82 single-family homes on the property.

“Sadly, this is not a bluff,” said Luff. “The fact of the matter is the trust is made up of 18 beneficiaries, most of whom have little or no interest in the golf business. Retirements and college tuitions need to be funded. The value of the land is in no way substantiated by the income generated by the golf course without a development component.”

Luff said, “The path that the trust has taken is not the path of least resistance.”

“We know our rights as landowners, and we have chosen a compromise with the town of Lynnfield,” said Luff. “If these zoning changes are rejected, we will not be back with a third age-restricted development. It will be a by-right development requiring no zoning changes and no Town Meeting. However, more importantly, a rejection of these amendments would send a message loud and clear to my family and the boards, committees and residents who support this plan that the town as a whole is not serious about compromise, not serious about the win-win, and has little regard for protecting open space, clean water and a business that has been a staple of the community for nearly 100 years. We don’t believe that is who the town of Lynnfield is.”

Chair Brian Charville said the Planning Board voted to recommend the two zoning changes because it’s a “good balance for the town.” If Fall Town Meeting approved Articles 6 and 7, he said the developer, Toll Brothers, will be required to go through an “extensive permitting process” with different boards such as the Planning Board.

“Construction won’t start tomorrow,” said Charville. “We can address any concerns that may arise.”

“I am going to ask you to keep one thing in mind tonight as you consider how you will vote on this issue,” said Dalton. “The debate tonight is not whether something will be built on the Sagamore property. The question is what will be built on this property and when. This is an opportunity for us as a town, a town that values its character, to move forward with a development that is a win-win for both parties.”

“Abutters organized to defeat the proposal at Town Meeting, and they were successful,” said Dalton. “Mr. Chambers exercised his property rights, and promptly sold the property. And not long after, a high-rise apartment complex was built on the land. Was that a better outcome? If you judge the number of abutters who sold their homes and moved away, it was evident they misplayed their hand. In my mind, voting this down is playing Russian roulette with the future of this town.”

Planning Board Vice Chair Kate Flaws supported Articles 6 and 7 because it would protect 98 acres of open space.

“If you care about maintaining clean water and clean air, I hope you will join me in supporting these two warrant articles,” said Flaws.

Upper Main Street resident Ken Peterson urged Fall Town Meeting to reject the zoning changes because of traffic concerns. He said speeding is a problem on upper Main Street, which he said is compounded by the curved road.

“It’s one of the most dangerous roads in the state,” Peterson maintained.

Peterson also noted that there is currently no fire protection on upper Main Street.

“We residents of Single Family Residential Zone D ask fellow citizens to vote down these proposed zoning change requests,” said Peterson. “This should be done in the interest of public safety. We voters, by a two-thirds majority, rejected this same zoning change request four years ago. When we read in the newspaper that the golf course syndicate wants to take another swing at housing, what it really means is they want to take another swing at the public safety of town residents.”

Peterson went over the three-minute speaking limit allowed by Town Meeting’s rules, and he kept talking when Town Moderator Joe Markey repeatedly asked him to wrap up his remarks.

Bourque Road resident Paul Marchionda asked why the back nine of the golf course is protected by the development agreement for 25 years and the front nine is not. He also believes that 82 homes cannot be built across the golf course.

Charville said the trust and the town agreed to the 25-year no development restriction for the western portion of the course. He said an engineering firm that worked on the rejected 2018 over-55 development the trust proposed determined 82 homes could be built.

“The town has not done an analysis, but our staff has looked at it and thinks the yield would be at least 70 single-family homes,” said Charville.

After the Article 6 vote, a number of the over-55 development’s opponents demanded “further debate” on Article 7.

Baldwin Lane resident Michele Cole urged Fall Town Meeting to vote no on Article 7 because of water-related concerns. She said it was “disheartening” that Fall Town Meeting voted to “shut down debate so quickly on such an important issue.” She noted that she and other residents have had to purchase home filtration systems to treat iron and manganese in the LCWD’s water.

“We are still in a Level 3 water ban and we were at Level 5 all summer long,” said Cole. “Things aren’t changing. I don’t see how they can possibly be adding 66 more units to the Lynnfield Center Water District right now. I am not against development, but there are so many questions to be asked and answered before this goes through. I don’t think that it’s necessarily true they can put 82 six-bedroom houses there.”

The LCWD is in the process of designing a greensand filter water treatment plant to treat iron and manganese that district officials anticipate will be completed by early 2025.

Patrice Lane resident Patricia Campbell made a motion to extend debate for an additional 15 minutes, which was seconded.

“There are people here who have listened endlessly to what they already knew from town officials,” said an irate Campbell. “I am justifiably angry.”

“I don’t appreciate you addressing the meeting that way,” said Markey in response.

A large number of the Sagamore development’s opponents left Fall Town Meeting before debate began on the public safety buildings and Town Hall project that appeared as Article 8 on the warrant (see separate story).