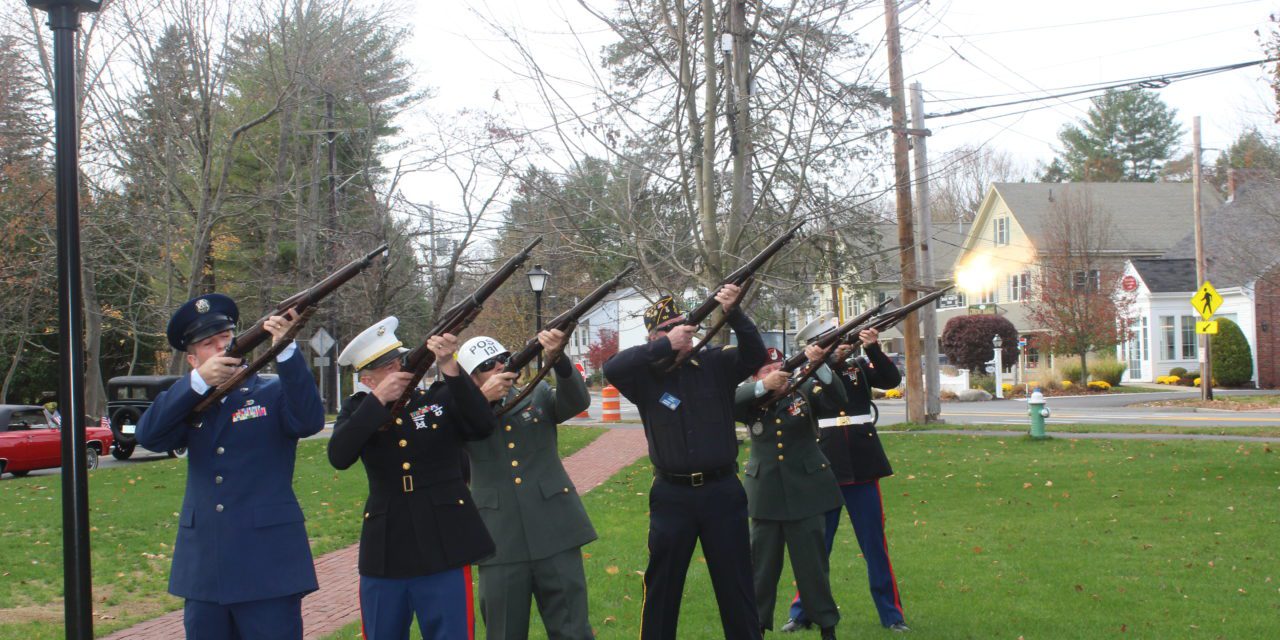 The ceremony began with a classic car parade organized by Lynnfield Housing Authority Executive Director Dan MacIntyre and the North Shore Car Club that was escorted to the Town Common by the Fire and Police Departments. Veterans Services Officer Bruce Siegel organized the ceremony and served as the master of ceremonies once again.

“We are here to honor our veterans who are steadfast in their beliefs in serving this great nation,” said Siegel. “We thank our warriors of today for continuing to fight for our freedom. You took an oath before God and country to protect the borders of this great nation. We humbly thank you for your service, bravery and sacrifice.”

“Veterans Day honors and celebrates veterans for their patriotism, love of country and willingness to serve and sacrifice for the common good,” said Siegel. “All of those who served have sacrificed and performed their duty. 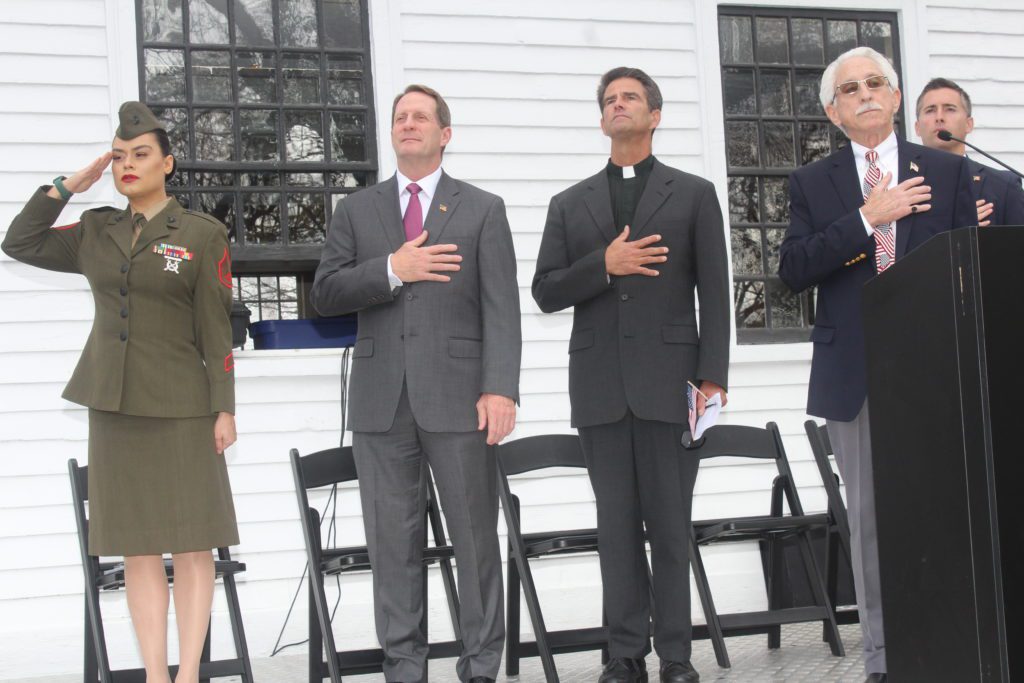 Siegel encouraged the ceremony’s attendees to honor veterans not only on Veterans Day, but every day.

“That was beautiful,” said Siegel.

St. Paul’s Episcopal Church Rev. Robert Bacon, a Navy combat veteran who served in the Persian Gulf War, gave the invocation and benediction during Veterans Day. He said veterans are “brave and generous men and women

who continuously gave their best when they were called upon to serve and protect our country.” 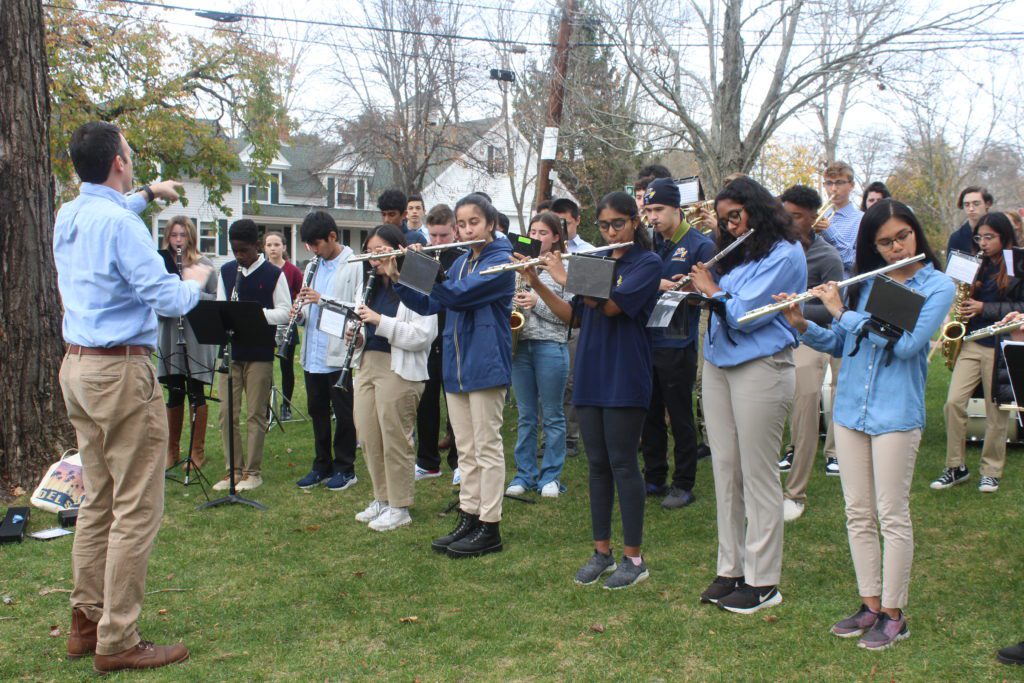 State Sen. Brendan Crighton (D-Lynn) thanked Siegel for the work he has done helping Lynnfield veterans and also thanked all of the veterans’ in attendance for their service to the country.

“I want to thank all of the veterans’ family members as well,” said Crighton. “Behind every service member are their spouses, children, siblings and parents who have sacrificed and supported them during their time of service to this great country.”

Crighton said, “Veterans have shaped the country that we know today.”

“I have had the privilege to work at the State House for the past 17 years,” said Crighton. “As soon as I started, it became clear that veterans are a top priority in Massachusetts. We look to improve our veterans’ laws not every few years, but every year. I am proud of the work that we have done to honor our service men and women. We all know about the tragic loss of life at the Soldiers Home in Holyoke during COVID. This past session, we were able to allocate $400 million to go towards a new Soldiers Home and $200 million to get veterans care across the state.”

Crighton also recalled that Gov. Charlie Baker signed the SPEED Act into law last month, which streamlines the processes for occupational licensure and school enrollment for military families who transfer to Massachusetts. He said the law will allow the families of service members to continue their careers and education while a loved one is stationed in the state.

“We do a lot for our veterans, but we can’t do more unless we know the issues they are facing,” Crighton continued. “I ask for your help as we head into a new legislative session to please partner with us so we can make our system better. There is always more work that we can do.”

Eight-year Marine Corps veteran Alice Ward served as the guest speaker during the Veterans Day ceremony. Ward, who also spoke at the town’s Memorial Day ceremony in May, said service members and veterans have “helped keep our country and citizens safe and free.” She thanked veterans’ families for the support they have provided to their loved ones. 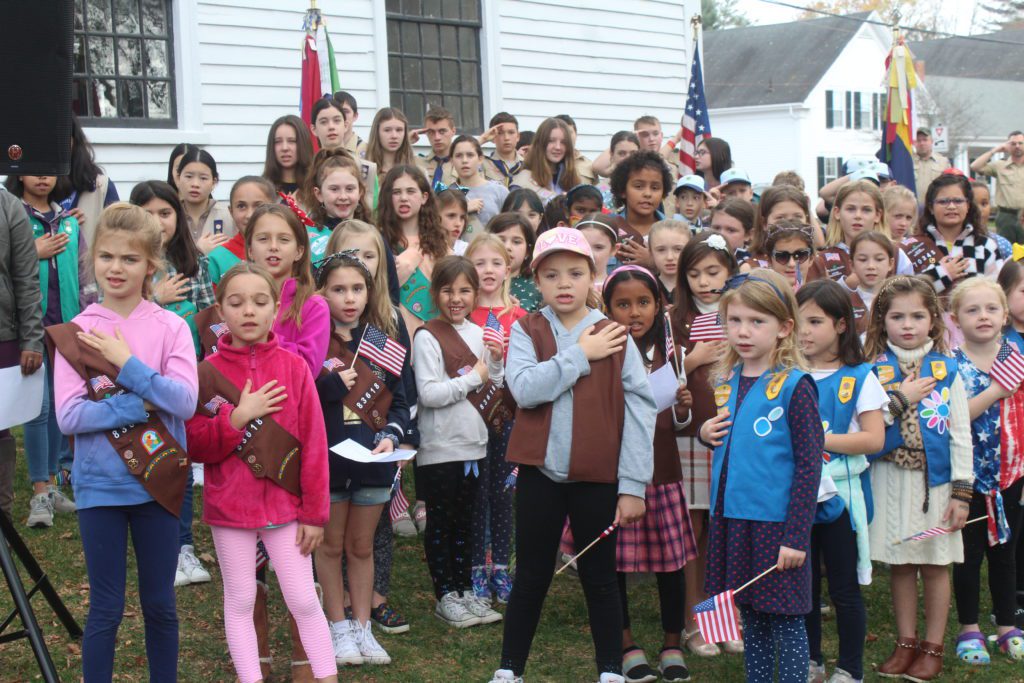 “Your love, support and resilience are the backbone of this nation,” said Ward. “That must never be forgotten.”

“Veterans Day honors all veterans who served America in war and defended democracy,” said Ward. “Today, we honor our veterans who unselfishly placed their lives on the line for our freedom. Those men and women were ordinary people until they heard the call of duty, and answered it. They left their families, homes and their lives not for recognition or fame, or even the honor we bestow upon them today. They fought to protect our country and maintain our way of life. As we honor our veterans and remember their great deeds, let us also salute those who are currently fighting for freedom in harms way.”

“That is why we must defend it,” said Ward. “Now is the time to not only honor those who fought and are fighting for our freedom, it is also the time for each of us to take part in protecting it. The defense of freedom is not just for those in the military. Each of us shares that duty and that responsibility. We don’t have to join the Army or the Marines to actively defend our way of life. We can protect our protect freedom simply by maintaining it in America.”

Ward said Americans can protect freedom by “voting in elections and speaking out against injustices.” She also encouraged residents to volunteer, and teach children “what it really means to be an American.”

“We must also ensure that everyone feels the benefit of freedom,” said Ward. “Now more than ever, our communities are very polarized, which makes us vulnerable to enemy attacks.”

Ward said the country has to do more to support veterans and service members. She recalled how she carried a 3-year-old boy named Austin at his father Connor’s funeral.

“Connor was a young Marine who struggled with PTSD and ended his life,” said Ward. “Veteran suicides remain a national crisis, and we must provide assistance to veterans struggling with mental health.”

After Ward concluded her remarks, she was given a round of applause.

Select Board Chairman Phil Crawford thanked Siegel for helping veterans get the services they need as well as organizing the town’s Veterans Day and Memorial Day ceremonies. He also thanked Siegel, a Navy veteran, for his service.

The ceremony’s attendees gave Siegel a round of applause.

Crawford said Veterans Day is an opportunity to honor “the men and women who have worn the nation’s uniform.”

“We thank them for their service, their courage, their valor and their devotion to duty,” said Crawford. “We owe so much to our veterans, and it’s a debt we can never truly repay. Honoring the sacrifices many have made for our country in the name of freedom and democracy is the very foundation of Veterans Day. Whether they served in the time of peace or war, all of America’s veterans share a common bond: Their unwavering belief in the cause of freedom. It’s a belief so strong that they were willing to give up their lives, if need be, in its defense. This nation will remain the Land of the Free so long as it is the Home of the Brave.”

The ceremony concluded with Girl Scouts leading attendees during a performance of “God Bless America.” Townspeople gave the Girl Scouts a round of applause. Attendees also enjoyed lunch provided by the town.