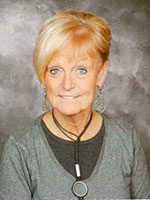 Born in Winchester on February 27, 1948, she was the daughter of the late Kenneth R. and Marjorie B. (Connell) Hatfield.

Sally was raised in Lynnfield and was a graduate of Lynnfield High School. She graduated from Salem State College and subsequently went on to attend Bay Path College from where she received her master’s degree. Sally had worked as a teacher in the Reading Public School system and was a member of the Massachusetts Teachers Association.

Sally was the beloved wife of the late Gary M. Mucica. She was the sister-in-law of Bill Mucica and his wife Carol of Tewksbury. She was the caring aunt of Sarah Tavares and her husband Michael of North Reading, Justin Hatfield of Plymouth, Paul Mucica of Tyngsboro and Elizabeth Cole and her husband Thomas of Lowell. She was also the sister of the late Richard Hatfield and his late wife, Susan Hatfield.

Her funeral services will be held at the Centre Congregational Church, 5 Summer St., Lynnfield on Saturday, July 11 at 10 a.m. Visitation for relatives and friends will be held at the McDonald Funeral Home, 19 Yale Ave., Wakefield on Friday, July 10 from 4-8 p.m. Interment will be in Puritan Lawn Memorial Park, Peabody.

In lieu of flowers, contributions may be made to the Sally Hatfield Mucica Scholarship Fund, c/o Steven Rogers at the University of Massachusetts Lowell, 1 University Ave., Lowell, MA 01854.