SC gets glimpse of innovation’s future 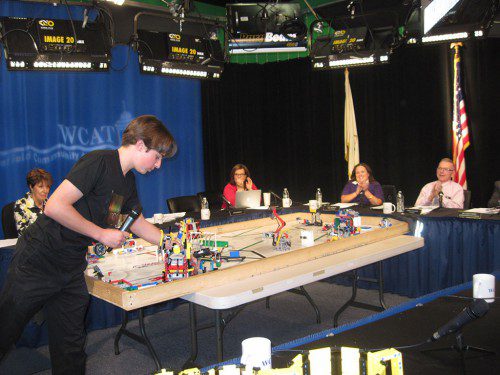 AT last night’s school board meeting, Wakefield student Cole Kraus demonstrated how a robot designed by him and other robotics team members could solve a puzzle in two-and-a-half minutes. Kraus and Galvin Middle School students Sydney Yee and Calvin Yee and high school student Preston Yee will attend a FIRST Robotics Competition in St. Louis next week after having won the statewide robotics competition. All robotic moves are through visual programming, explained Lester Yee, coach for the team. (Gail Lowe Photo)

WAKEFIELD — An intensely difficult robotics puzzle designed by Wakefield students who are also members of the “We Are Robot” team took the spotlight at last night’s school board meeting when they demonstrated how the tricky puzzle could be solved within two-and-a-half minutes.
For their innovative efforts, the Wakefield team won top spot in the state robotics competition and will now head to St. Louis, Mo. next Wednesday, April 22, to compete in a national FIRST Robotics Competition (FIRST is an acronym for For Inspiration and Recognition of Science and Technology). This year’s theme is “Teaching and Learning.” The competition will be held in the Edward Jones Dome in St. Louis.
Representing the Galvin Middle School were students Sydney Yee and Calvin Yee. Preston Yee represented the high school, while Cole Kraus, a home-schooled freshman, demonstrated how the robot could solve the puzzle. All robotic moves are through visual programming, explained Lester Yee, coach for the team.
The results of the St. Louis competition will determine which team will represent the United States in an international competition.
Superintendent of Schools Dr. Stephen K. Zrike said that the robotic team “opened his eyes.”
“We are very proud of the We Are Robot team, as they have been excellent representatives of the Wakefield community. The robotics work combines all the elements of STEM, as students need to use their coding, programming, mathematics and engineering skill-set. Learning about their efforts has been an impetus for us to design a STE(A)M pathway in our schools. Our students are certainly ready. We Are Robot will be competing in St. Louis next week at an International competition given that we were identified as one of the national championships earlier this year. We wish them the very best!”
Coach Yee and his Assistant Coach Annette Dupon spoke at length last night about the competition and called it an “exciting time for the schools” because students from all over the country will be in St. Louis showing off their robotic prowess.
“There were 400 teams in Massachusetts,” said Yee. “Wakefield came out on top. Only 25 percent qualify.” He added that the Wakefield team was notified just before Christmas that they had won the state competition.
FIRST Robotics Competition (FRC) was founded by Dean Kamen, an inventor, entrepreneur and advocate for science and technology. According to his website, he is passionately determined to help young people discover the excitement and rewards of science and technology.
Kamen refers to the puzzles that will be shown in the competition as an “engineering design problem that needs to be solved in an intense and competitive way.”
The FIRST Robotics Competition challenges teams of young people and their mentors to solve a common problem in a six-week timeframe using a standard “kit of parts” and a common set of rules. Teams build robots from the parts and enter them in competitions designed by Kamen, Dr. Woodie Flowers and a committee of engineers and other professionals. All parts of the puzzle are shipped to St. Louis for the competition.
The FIRST competition calls the puzzle “a unique varsity sport of the mind designed to help high-school-aged young people discover how interesting and rewarding the life of engineers and researchers can be.”
Kamen said, “FIRST is more than robots. The robots are a vehicle for students to learn important life skills. They often come in not knowing what to expect — of the program or of themselves. They leave, even after the first season with a vision, with confidence, and with a sense that they can create their own future.”
Three separate events will be held over the four-day competition: The FIRST Robotics Competition Championship, the FIRST Tech Challenge World Championship and the FIRST LEGO League World Festival. Also featured will be the Junior FIRST LEGO League World Festival Expo.
The event will be sponsored by well-known companies such as Microsoft, Bechtel Corporation, the Dow Chemical Company and Edward Jones Foundation, among others. Other strategic partners include Boeing, 3M and NASA.