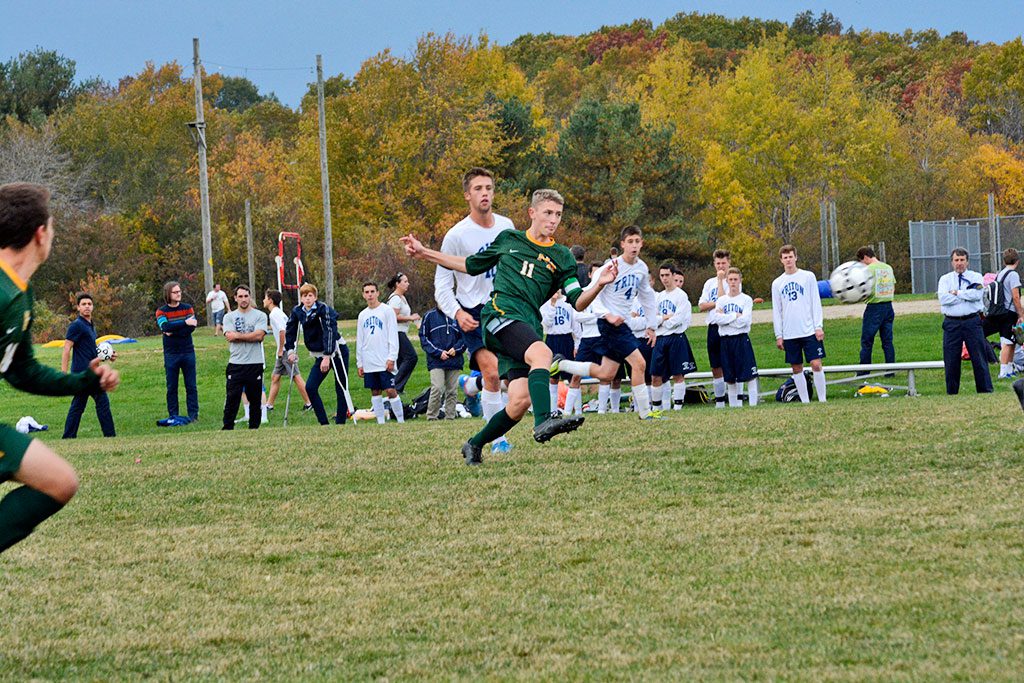 TRITON WINNER. Senior Tri-Captain Kilian Daly scored the lone Hornet goal from a Matt Ashness kick to secure a much needed two points in a 1 to 0 win against Triton. One point remains to guarantee the boys a slot in the playoffs. (Deanna Castro Photo)

NORTH READING — As the season winds down, the boys soccer team needed just one point to qualify for the state tournament with three games remaining,  including Tuesday’s Senior Night clash with arch–rival Lynnfield at the Arthur Kenney Field. The Hornets fought the Pioneers to a 0–0 tie, punching their ticket to the tournament. At the same time, the tie eliminated Lynnfield from the postseason. Full coverage in next week’s Transcript.

With their 1-0 victory over the Triton Vikings on Thursday the Hornets remain just one point away from the state tournament. Senior captain Kilian Daly scored for North Reading. Senior Billy Brandano recorded his ninth shutout of the season.

Triton had two great opportunities to get on the board early in the first half. The first chance came when a miss–hit clearance attempt fell right to a Vikings forward who rang his shot off the crossbar. The second came off of a cross from the right wing that went right to a Triton midfielder who hit a full volley, but Brandano made a spectacular save diving to his right to keep the game scoreless.

The save proved to be gigantic as the Hornets scored the lone goal of the game in the 28th minute. Senior Matt Ashness, in his first game back from injury, took a free kick, drove the ball to the near post and found Daly all alone. Daly made no mistake with the header and finished off his fifth goal of the season. The North Reading defense shut the door the rest of the way and the Hornets escaped with the win.

The Hornets were shutout by the red hot Pentucket Sachems 2-0 on Saturday afternoon. Pentucket is 9-0-1 in their last 10 games.

The Sachems quickly scored their first goal just four minutes into the game after a North Reading turnover in their defensive zone. The Hornets settled down after the goal and controlled play creating a bunch of chances to tie the game. Their best chance came from junior Cam Davis but his shot was turned away by the goalkeeper.

Although North Reading was controlling play Pentucket extended the lead late in the first half. The Sachems sent a free kick into the box where CAL leading scorer Kyle Sedler headed the ball past an on rushing Billy Brandano.

The second half was evenly played. The Hornets created some good scoring chances, but once again finishing those opportunities was the issue and the Sachems went on to victory.