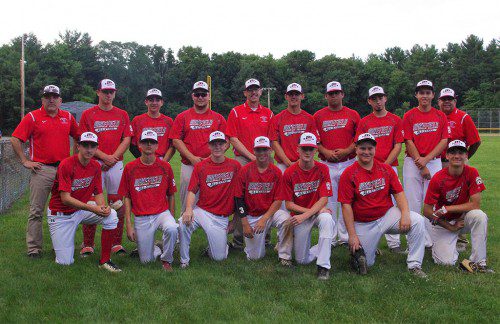 BILLERICA — The Wakefield Senior Little League Baseball All-Stars played the best of a two out of three State Final match up against Oxford on a neutral site at Billerica’s Locke Field this weekend and, despite their best efforts, fell short losing two out of three games.

After winning the opener on Saturday by an 18-13 score, Wakefield fell short in the second game on Saturday night by a 16-2 tally. In the rubber game on Sunday afternoon, Wakefield lost by a 13-3 score.

The 90 plus degree temperature in the afternoon on Saturday didn’t dampen Wakefield’s drive in Game 1.

Wakefield once again drew away losing the coin toss but that helped them as they jumped out to an early lead.

Tyler Pugsley drew a walk and hits by Ben Nakhoul and Will Shea drove in Pugsley for Wakefield’s first run of the game.

Robert Shaw, on the mound for Wakefield, retired the first three batters to give Wakefield the 1-0 lead after one.

The second inning started off with Brendan Coughlin getting hit by a pitch and Colin Jaena walking. Kevin DeLeary’s sacrifice fly scored Coughlin making it 2-0. Chris Brown, Pugsley and Cole Kraus then all reached on walks and Brown and Pugsley scored on a couple of wild pitches and it was 4-0. Ben Nahkoul’s deep sacrifice fly scored Kraus and Wakefield had six runs on the board.

Oxford answered with three runs in the second keeping Wakefield in check, 6-3, after two. Shaw dominated on the mound with another 1-2-3 inning in the third.

The bats were quiet for Wakefield until the fourth. Kraus started off with a single and Nahkoul’s long single scored Kraus. Nick Porter hit a long home run and added two RBIs to his productive all-star outing.

Oxford answered with a few singles and scored one, but was then shut down by two strikeouts by Shaw with Wakefield having a 9-4 lead after four.

The fifth inning, after Oxford’s fourth pitching change, proved to be another productive one for Wakefield starting with base hits by Jaena, Brown, Pugsley and Kraus. Wakefield added four more runs to its lead.

Oxford answered with one run in the fifth and the sixth. Shaw was in command on the mound and he finished the sixth with a commanding lead with an additional two strikeouts.

In the top of the seventh, a Wakefield rally started with a walk by Kraus and hits by Nahkoul, Will Shea (who would have four RBIs on the day), Porter and two more walks to Jaena and Coughlin. Wakefield scored five more runs.

Mike Melito and Jaena came in to pitch in relief in the seventh. Wakefield secured the win 18-13 in the first of the doubleheader on Saturday.

Wakefield drew away again in Game 2 on Saturday.

Wakefield started strong with a home run by Nakhoul with Kraus on first putting Wakefield up 2-0 to start off.

Kraus started on the mound for Wakefield. Despite two quick outs, Oxford answered with a home run with one man on tying the game at 2-2.

DeLeary got a single for Wakefield only to be stranded in the second. Oxford answered with a single and a home run going up by two and broke it open in the third with an additional six runs.

Despite an early strike out by Brown who pitched in in relief, Oxford was in a groove and continued with several walks and hits driving in another six runs.

Wakefield’s bats were quiet the rest of the game and Oxford tied the series at one game apiece with the mercy rule win after five innings by  a score of 16-2.

The rubber match on Sunday decided the state finalist. Wakefield won the coin toss and was the home team.

Jaena got the start but a few defensive miscues set the tone early. Oxford jumped out to an early lead 6-0 in the first with only one earned run.

Shea and Nakhoul pitched solid in relief for Wakefield over the next five innings but the early hole was too deep for Wakefield to mount any serious comeback.

Coughlin was stellar behind the plate in all three games of the series despite the blistering heat.

DeLeary, who played a great shortstop all series, had a great day at the plate with a single and double in two at bats.

Kraus added a solid single in front of Wakefield’s third home run of the series by Nakhoul. Nakhoul was the hitting star of the tournament collecting three home runs in the series including a titanic 370 foot blast in the sixth inning of Game 3.

Unfortunately, this wouldn’t be enough and Wakefield lost a tough Game 3 by the 13-3 final.

Wakefield was honored at the end of Game 3 as Massachusetts’ State Finalists and Oxford, the State Champions. Oxford will represent Massachusetts in the six day regional competition in New Jersey next week which will culminate in the Senior World Series in Bangor, Maine in August.

Wakefield’s Coach Matt Shea said, “This team had a nice little run here. We got a great pitching performance from Robert Shaw in Game 1 of the series to get the win. He was outstanding once again. The guys really hit the ball well all three games in the series. Ben Nakhoul was obviously outstanding. He is going to be a really good high school hitter these next two years. He can hit the ball as far as anyone I have seen at his age.

“Unfortunately, Oxford got hot with the bats for two games and we just could not quite keep up with them. It was a real privilege to coach this group over the past few weeks, and Coach Kevin Kraus, Frank Lanzerone and I are really proud of how they performed,” concluded Shea.