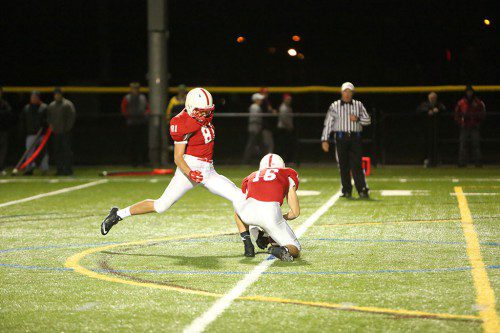 MIKE CUSOLITO’S 37 yard field goal topped Woburn at the buzzer in a wild 26-23 win for Melrose, who finished their regular season perfect at 7-0, with playoffs beginning next week. (file photo)

MELROSE — Fans can always expect something wild when the Melrose Red Raiders and the Woburn Tanner football teams hit the field. That held true to form last Friday, Oct. 23 at Connolly Stadium in Woburn when Melrose took an exhilarating 26-23 win at the buzzer, stunning a Woburn team who held a 23-21 lead with just 42 seconds left in the game. The Raiders perfected a 40 second, clock-expiring drill that will be talked about for years; it led to victory and a perfect 7-0 finish on the regular season as Melrose heads to playoffs.

Melrose held a lead of 21-17 late in the fourth quarter when Woburn running back Dan Moscat rushed for a 2-yard touchdown, lifting Tanners 23-21 with less than a minute to go, and seemingly ripping victory from the Raiders. From there, things went south for Woburn, thanks to a heroic special teams effort led by Melrose’s Alex Burton and Steve Abbott. In just seconds, a simple point after attempt by Woburn was thwarted by Abbott, deflected into the arms of Burton, who ran the ball back all the way into the end zone for a 2 point conversion which tied it up at 23-23. A stunned Woburn team was forced to kick off to Melrose and from there, Melrose quarterback Julian Nyland, running back Mike Pedrini and kicker Mike Cusolito delivered a 40 second drill fans will remember for ages.

With less than a minute to go, Melrose received the ball on the their own 30. After a series of passes to Pedrini, Nyland marched the ball to the Woburn 20, plenty of room for Melrose kicker Mike Cusolito, who is capable of reaching from the 40s. Just three seconds remained on the clock when the senior struck, sending the pigskin sailing through the goal posts, prompting celebration from Melrose players, who finish their regular season perfect at 7-0, a feat not done in several years. And unfortunately, putting on hold a planned celebration by Woburn to honor their coach Rocky Nelson’s 200th victory (delayed three weeks now).

It was another standout game for Melrose quarterback Julian Nyland (10-18,140 passing, 110 rushing, 2TDs) who opened the game on a fake hand off and ran a 74 yard sprint into the Woburn end zone putting Melrose on top 7-0 just 15 seconds into the game. If it looked like it was going to be an easy game, it wasn’t, according to Melrose head coach Tim Morris.

“When you score fast, it’s not always the best thing,” said Morris. “You don’t want to risk thinking that it’s an easy game. It never is with Woburn. We’ve had games like this for years against them, often us on the other side. They’re big up front and made it tough for us to run.”

Sure enough, Woburn’s Dan Moscat (130 yards, 3TD) was a menace for Melrose and he put the Tanners on board on Woburn’s next possession with a 90 yard punt return, making it a 7-7 game just 35 seconds into the contest. Melrose fell to a 17-7 deficit at halftime, after a 36 yard Woburn field goal in the second and a touchdown by Moscat with 6:00 left in the half. Melrose had one turnover in the drive.

At halftime, Melrose clearly needed to make some adjustments. “The kids just kept at it,” says Morris. “We knew offensively that we had to get some things going. There were mistakes that we discussed. It was a matter of settling down and scoring.”

That they did. Melrose came back energized, especially junior Mike Pedrini who opened the second half with a 72 yard running touchdown (his 12th of the season), to cut the lead to 17-14. Nyland upped the ante, rushing over 80 yards on their next possession, which led to a 20 yard pass to Melrose senior Jay Tyler and a 21-17 lead with less than eight minutes to go. Woburn took advantage of every minute on the clock, finding themselves in a 4th and 3 scenario on the Melrose 7 yard line with just 1:44 left to play, converting first down and following it up with a two yard TD by Moscat.

That led to the memorable PAT attempt, the block by Abbot and the conversion by Burton which tied it up at 23-all with 40 seconds left and a quieted crowd.  Melrose’s Nyland stepped up to the plate, hitting Pedrini on a 21-yard pass to midfield and on 3rd down found Pedrini again on 16-yard toss that brought Melrose close to field goal range. Melrose ran the ball to the 20 with six seconds left and called for Cusolito, the 6’3″ special teams standout who hit an easy shot that brought a stunning victory back into the hands of Melrose.

With the win, Melrose finished the regular season perfect at 7-0 and has earned top seed status in the Div. 3 Northwest Playoffs.

Number 1 seeded Melrose is slated to once again host 8th seed Wakefield (2-5) in the opening round of Div.3 Northwest playoffs this Friday night at home. The Raiders are hoping to match last year’s victory when they dominated the Warriors in a 24-0 shutout. But to coach Morris, he never overlooks our neighbors to the North, instead playing one game at a time.

“We’re only looking ahead to Friday’s game,” he said. “We’re not considering records. Look at Woburn’s record going in to this game. We’re expecting to play typical Melrose-Wakefield contest. They’re big up front and have some outstanding skill kids.”

As for a deeper playoff run for Melrose? “We just tell the kids, ‘keep working hard and good things happen’. We’re just going to continue to play our brand of football.”