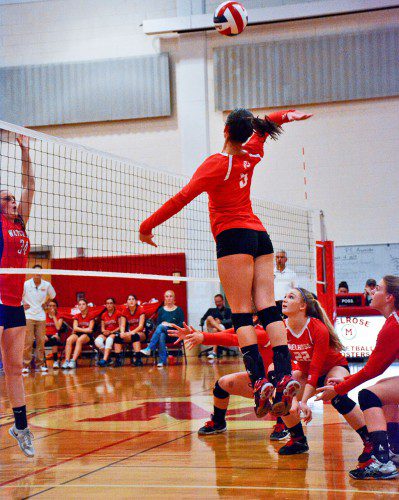 THE MELROSE Lady Raider volleyball team have proven to be tough to beat in the final stretch. Melrose (18-2, 16-0) took down reigning State Champ Newton North on Monday 3-2 and hope to secure a first seed in the Div. 2 North playoffs. (Steve Karampalas photo)

MELROSE — The surging Melrose Lady Raider volleyball team improved to 16-0 in the M.L. and 18-2 overall after another winning week, capped off with a thrilling 3-2 victory over a historically tough Newton North team on Monday, Oct. 26 at Newton North High School.

Melrose was led by hitters Hannah Mulcahey with 17 kills, followed by Marissa Cataldo with 13. Setter Lily Fitzgerald totaled a huge 40 assists for the Lady Raiders, who count reigning Div. 1 State Champ Newton North as a major rival, having beaten the Tigers in 2014 for the first time in several years. At the serving line on Monday, Melrose was lead by Mulcahey, Victoria Crovo and Marissa Cataldo. The trio have been part of Melrose’s three-pronged attack of offense. All three have combined for over 500 kills this season, with Crovo taking a boat load of them with 202, Cataldo with 158 and Mulcahey with 141 kills. Senior Meagan Leyne has also had a very strong second half of the season now with 68 kills to date.

The playoff bound Lady Raiders have already taken the league outright in a sweep at 16-0 and are keeping one eye on playoffs, which should begin as early as Thursday, Nov. 5. Seeding takes place Nov. 3. Melrose is expected to battle for the top seed in the Div. 2 North with 16-1 Bishop Fenwick, who may be Melrose’s greatest competition for a Division 2 North title. Other teams looking to fight for crown contention include Arlington Catholic (14-3) and Marblehead (14-0).

Earlier in the season, Melrose head coach Scott Celli predicted this team would improve as the season goes by, and right he was. Melrose has been commanding in their last few weeks of season, completely shutting out league competition but, more importantly, taking down statewide heavyweights such as Arlington Catholic (16-1) and the Newton North Tigers.

Newton North (10-3) was not the only team Melrose took down over the week. Melrose took out two Middlesex Freedom League opponents, Watertown and Stoneham last week. Prior to the Stoneham game last Friday Melrose hosted Senior Night at the Melrose Veterans Memorial Gym in order to honor their tri-seniors: captain Marissa Cataldo, Hannah Mulcahey and Meagan Leyne. Melrose celebrated the night with a dominating win over Stoneham by scores of 25-10, 25-8, 25-4 that finished a league sweep at 16-0. Three days prior, the team also beat Watertown, 25-10, 25-8, 25-7. Victoria Crovo led in kills with 15 and Cataldo had 10.

Meanwhile, Melrose is closing their regular season on a challenging note. Melrose will travel to Ursuline Academy in Dedham on Wednesday (post deadline) to face the 12-4 Bears and will wrap up the season with a road trip to a perennially tough Westborough (14-2) on Monday, Nov. 2. The team is ranked among the top five in the state. In order to shape up for playoffs, no doubt coach Celli’s Lady Raiders want to rumble with the best.

Playoff brackets are expected to be announced on Tuesday, Nov. 3. Look for next week’s edition or visit www.schedulestar.com for up-to-date game information.