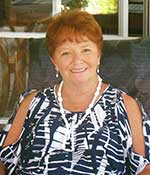 PORT ST. LUCIE, Fla. — Sharon A. (Edgar) Comeau, of Port St. Lucie, Fla., formerly a longtime resident of Woburn and Billerica, died peacefully surrounded by her family on Nov. 4 at the age of 71.

Sharon was born in Berlin, N.H. on Dec. 18, 1944 to Roland B. and Margaret (Hale) Edgar. She was raised in Gorham, N.H. and graduated from Gorham High School.

In her younger years Sharon worked at the Mt. Washington Hotel. She later moved to Boston where she met the love of her life, Richard Comeau. They were married at the Holy Family Church in Gorham in 1963.

Sharon and Richard settled in Woburn to raise their family and later moved to Billerica for many years. Sharon retired after 30 years of employment with TRW in Cambridge and in 2004 moved to sunny Port St. Lucie, Fla., at the Savanna Club where Sharon had many friends and was very active in the community.

Sharon had a very giving nature and spent a lot of time helping others. In particular she was involved with the Salvation Army for over 20 years and was very passionate for the Angel Tree Program during the Christmas season. She believed no child should wake up on Christmas morning without a toy.

Sharon loved being surrounded by family and friends, she was quick to throw a party for any occasion and her house was always open to everyone.

She had a big heart and had a positive effect on anyone she came into contact with. She will be greatly missed by her loving family.

Sharon was the beloved wife of Richard Comeau of Port St. Lucie, Fla. She was the loving mother of Debra Khan and her husband Iqbal of Shrewsbury, Michelle Johnson and her husband Erik of Merrimack, N.H. and Kristina Kelley of Merrimack, N.H. She was the proud grandmother of Joseph, Nicole, Steven, Rihana, Aliyah, Samia, Brody, Zakaria, Brynna and Leith. She was the loving great-grandmother of Carson. She is also survived by a loving extended family and many friends.

In lieu of flowers contributions may be made to the Ft. Pierce Salvation Army, 605 Ohio Ave., Fort Pierce FL 34950 or at https://www.salvationarmyflorida.org/stlucie. To send a message of condolence please visit www.gatelyfh.com.