Warriors come up short to Arlington, 4-3 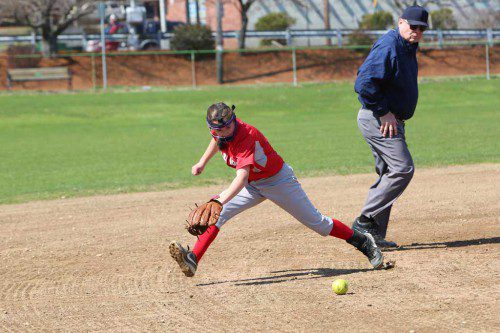 MEGHAN BURNETT had two hits and drove in a run for the Warrior softball team yesterday against Arlington. Wakefield was edged 4-3 by the Spy Ponders for their second straight loss.
(Donna Larsson File Photo)

ARLINGTON — The Wakefield Memorial High softball team traveled to Arlington yesterday and, despite a fine pitching performance from Amanda Boulter, lost 4-3 to the Spy Ponders at Arlington High School.

“I don’t blame any of the kids. It’s like I always say, when we win it’s on them. When we lose it’s on me and I didn’t do a good job coaching today. So I blame myself,” said Wakefield coach Rick “Coach Q.”Quattrocchi.

Wakefield sported a 3-1 lead going into the bottom of the sixth when the Spy Ponders rallied.

“We pounded out 10 hits, We outplayed ‘em all over the game. We had a 3-1 lead going into the bottom of the sixth but we gave it up. Boulter pitched very, very well. She deserved a lot better. She was on top of her game,” praised “Coach Q.”

With a good effort squandered, the coach was willing to put the blame for the loss squarely on his shoulders.

Burnett had one RBI, while Kraus, Gasdia and Hannah Dziadyk scored the three Warrior runs.

“We had 10 hits and did everything we’re supposed to do and the coach failed. This is on me. I should’ve gotten them up a little but better and we make no excuses as a team and we’ll come back Friday.”