Softball team ready to embrace a season of change 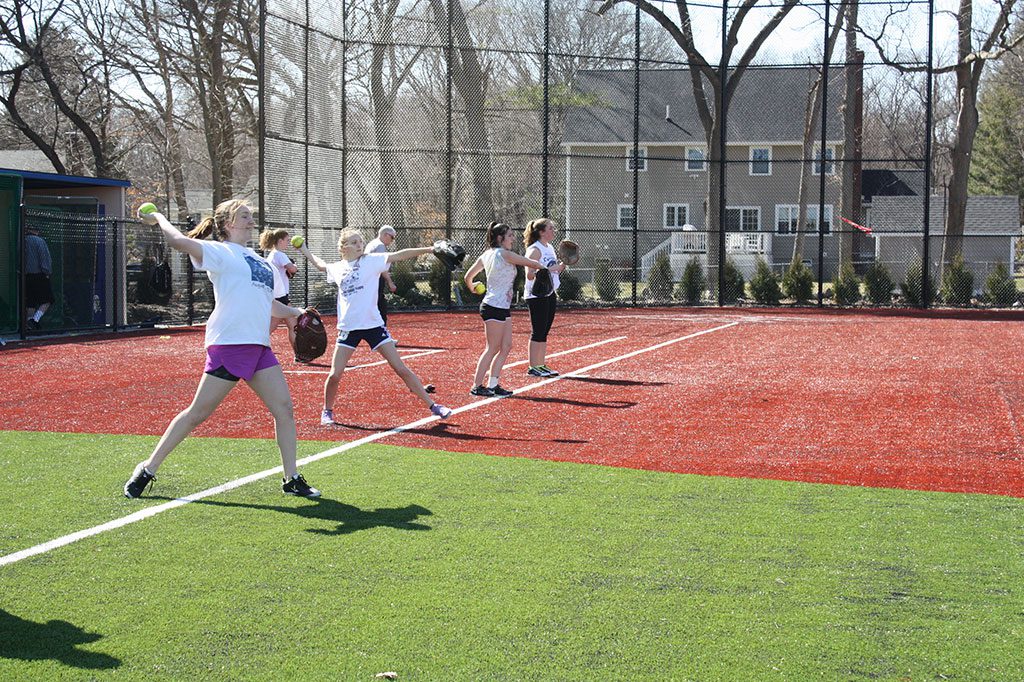 MEMBERS of the varsity softball team are excited to be breaking in their brand new state of the art turf field at the high school, soon to be a showpiece in the Cape Ann League. (Maureen Doherty Photo)

LYNNFIELD — Change is afoot this season for the Lady Pioneers softball team.

The athletes are getting used to playing the game on an artificial turf surface, which is a different experience from playing on an infield of clay or grass. Their facility has also been relocated to the opposite corner of the high school athletic complex from where the team has traditionally played. And a turnover on the roster has necessitated changing the positions played by some veterans and filling in other holes with newcomers.

The uncertainty of the weather throughout the spring preseason has added another layer of complexity to this season of change. As of Monday, with one month of the spring season now in the rearview mirror, the team had played just one game. Fortunately, the Pioneers were victorious in that game, a 22-8 win over the Rockport Vikings, played at their new field on April 8.

“It was one of those days that was so cold and raw that the pitchers were having a hard time holding onto the ball. I know they walked a lot of people. We walked some. But we also hit the ball too,” recalled head coach Peter Marinelli.

The game was a test of raw nerves, literally. He said it was played on a snowy/sleety afternoon that created an odd visual mix of brown, black and white on the infield. The infield consists of the same type of turf surface as the artificial green grass, but it’s colored brown to look like infield clay. It is filled in with the same black pellets to raise the tuft.

So in addition to battling the weather the girls were battling the ball speed, especially on grounders. “It really slows the ball down,” Marinelli said of the new infield surface. “But it’s the same for both teams. I keep telling the kids we have to learn how the ball bounces and what you can and can’t do. We’re learning a lot, actually. It’s a learning process for us.”

The Blue and Gold are led by senior team captain Hannah Travers and a trio of assistant captains, Kelly Hosterman and Mackenzie Comeau, who are both seniors, and junior Annika Han.

Last year, the Pioneers finished third in their division and competed in two post-season state tournament games. “We were 11-9 in the regular season and we won our first game in the tournament and lost our second game, so we ended up 12-10,” Marinelli said.

This year’s team is comprised of 15 players divided evenly between upper and lower classmen. There are five seniors, three juniors, three sophomores and four freshmen.

Hitting is currently the team’s leading strength, along with a good dose of speedy runners. “We’ve always been a pretty good hitting team the last few years,” Marinelli said, adding, “We have to improve our defense. We do have some people coming along that are good defensive players, but they are not proven yet.”

The team’s starting pitcher has not yet been determined either. The two returning pitchers are Han and Sadie Oliver, a senior. Last year, Han mainly played left field as she comprised one-third of the team’s strong outfield along with Travers in centerfield and Cassie Keane in right.

“We had an outstanding outfield. Our infield defense was what needed the work last year,” Marinelli said. This season, he has moved Travers to first base while Cassie Keane graduated, which opens up the outfield for a new crop of players. When Han is pitching, he will need a new left fielder. Marinelli also plans to work two freshmen into the pitching rotation, Olivia Keane and Hayley O’Brien.

Players with speed include Han, Keane, Olivia “Smiley” DeLuca, Rachel Badger and Marina McMahan. “We probably have more speed this year than we have had in quite awhile,” he said.

“The whole thing right now is going to be a learning process for us. We have to find out who is going to be most effective. Other than that, because of obviously the weather and field conditions, we haven’t had a chance to really have scrimmages to see who could do what against who, so it is just going to take some time to find out,” he said.

Marinelli added that due to the extent of the weather-related delays league-wide for the spring season, the athletic directors have said the first five games against league opponents would not count as league games.

With three games scheduled for this week and four over April school vacation, the team’s roster should be much more shored up in two weeks. The team was scheduled to play Amesbury on Tuesday and Ipswich on Wednesday, both after press time.

The Pioneers will host Hamilton-Wenham either tomorrow or Friday at 3:45 p.m., and East Boston will come to town on Marathon Monday, April 20 at 10 a.m.

Also during vacation week, the Pioneers will travel to Newton South for a 1 p.m. game on Tuesday, April 21, host Manchester-Essex on Wednesday, April 22 at 10 a.m. and travel to Georgetown on Friday, April 24 at 10 a.m.