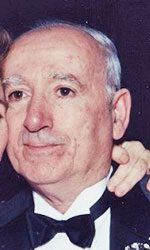 NORTH READING — Stephen Gerakines, age 82, of North Reading, formerly of Lowell, passed away surrounded by his loving family and friends on September 15, 2015.

Stephen was born on September 12, 1933 in Saco, Maine; he was the dear son of the late Kyriakos and Lemonia Gerakines. Stephen was raised in a large and loving family in Lowell, the oldest of 12 siblings. He had a lot of responsibility but always managed to do well at everything he attempted. Stephen was raised and educated in Lowell. He was an avid athlete growing up, a natural at handball and baseball. In class, Stephen was equally as talented; he was double promoted at Lowell High School and graduated at the age of 16 with Honors. Stephen wanted to see the world and enlisted in the United States Air Force on March 7, 1955.

Stephen was assigned to take courses at Keesler Air Force Base in Mississippi and was trained as an Air Traffic Controller; his job assignments took him all over the world to many places from as far north as Thule, Greenland all the way to the Philippines where he got to see new places, experience different cultures, and meet all kinds of people. Stephen continued to shine as an athlete during his time in the Air Force. He played baseball and was versatile as a shortstop, third baseman, and as a proud “southpaw” pitcher. Stephen was honorably discharged from active service at Donaldson Air Force Base in Greenville, South Carolina on March 6, 1959 and went on to serve as an active reservist until March of 1963.

Stephen married Barbara Alexander on May 18, 1968. The couple shared more than 39 years together and raised a family of seven children before her passing in August of 2006. Stephen and Barbara moved to Wilmington in 1958 and then to North Reading in 1977, where he resided for nearly 40 years. Stephen was a homebody who enjoyed spending time with his family, following Boston sports, playing cards, and attending and following horse racing.

Prior to retiring, Stephen worked as an Air Traffic Controller at Logan Airport from 1963 to 1997. Throughout the years he witnessed first–hand the many transitions in the both the field of aviation and air–traffic control technology. He was routinely commended for the quality and cool-headedness of his work as well as for his involvement in the training of new controllers.

Stephen will be fondly remembered as friendly, funny, and hardworking. He was dedicated to providing for his family, and loved them and his friends unconditionally. He will be greatly missed by all.

Stephen was the beloved husband of the late Barbara J. (Alexander) Gerakines, devoted father of Cheryl Moulaison and her husband Kenneth of Tewksbury, Stephen Gerakines, Jr. and his wife Jeanne of Pelham, NH, Perry Gerakines and his wife Suzanne of Crofton, MD, Timothy Gerakines and his wife Pamela of Raymond, NH, Keri Gerakines of Merrimack, NH, Joseph Gerakines of Arlington and the late North Reading Police Officer James Gerakines. He was the  loving “Grampy” of 10 grandchildren and two great–grandchildren, the cherished son of the late Kyriakos and Lemonia (Petropoulos) Gerakines. Stephen was the oldest of 12 siblings and is survived by many nieces and nephews.

Family and friends gathered for a funeral service at the Nichols Funeral Home, 187 Middlesex Ave. (Rte. 62), Wilmington, on Saturday, September 19. Interment with Military Honors followed in Wildwood Cemetery, Wilmington.   Memorial donations in Stephen’s name may be made to the American Cancer Society, 30 Speen Street, Framingham, MA 01701. Stephen served in the United States Air Force during the Korean War and was a retired Air Traffic Controller at Logan Airport. www.nicholsfuneralhome.com