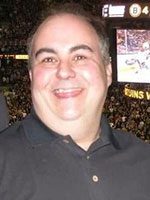 Stephen was born in Cambridge on Oct. 21,1965 to Robert E. and Ellen A. (Laskey) Varney. He was raised in Melrose, graduated from Melrose High School Class of 1983, attended SMU and graduated from East Coast Aero Technical School with a degree in aircraft mechanics. Stephen lived in Melrose for many years before moving to Beverly 10 years ago. Stephen had a garage on Wyoming Avenue in Melrose for 15 years, where he honed his skills as an expert mechanic. He worked at a young age at PV Speed Shop in Malden, worked as an aircraft mechanic for American Airlines, Boeing and Lockheed for several years and at Calley Whitmore in Somerville for several years.

Stephen had a passion for cars and was a talented mechanic who could restore and increase performance on muscle cars with the use of his “DYNO.” Stephen finally realized a dream of owning his own shop in January 2009, when he opened SV Engineering and Performance on Route 1 in Peabody with his dad Robert (Pops). He had many interests including his love of all kinds of music, photography, snowmobiling and motorcycles. He toured the United States on his bike many times and especially loved riding to the New Hampshire Seacoast, Hampton Beach and to his favorite spot “Beauty Kills” in Rye, N.H. Stephen was an avid sports fan, especially the Bruins and has been a member and follower of the National Hot Rod Association since he was a teenager.

Stephen was the beloved son of Robert E. and Ellen A. (Laskey) Varney of Melrose. He was the cherished brother of Michele Varney and David Varney, both of Saugus; Kevin Varney of Melrose; and Derek Varney and his wife Amie of Brentwood, N.H. He was the dear uncle of Colby, Tayla, Justine and Zachary. He is also survived by his close friend Suzanne LaCombe; lifelong friends Duke Finn and Gary McCarthy as well as numerous other lifelong friends and business acquaintances.

Visitation was held at the Gately Funeral Home, 79 West Foster St. Melrose on Sunday, March 22. A Mass of Christian burial was held at St. Mary Church, Herbert Street, Melrose on Monday, March 23. In lieu of flowers the Varney family encourages family and friends make a donation in Stephen’s name to the Wounded Warriors Project, P.O. Box 758517, Topeka KS 66675 or at www.woundedwarriorproject.org. To send a message of condolence please visit www.gatelyfh.com.