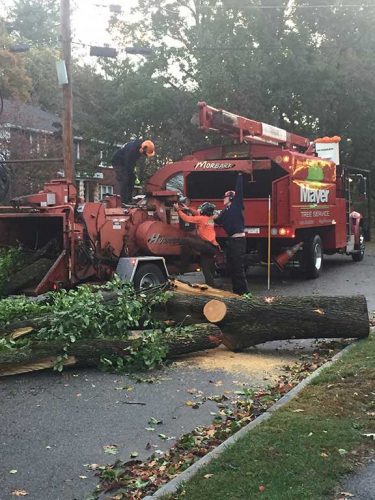 POWER WAS LOST on Briarwood Lane this morning after this tree came down on electric lines and a house.

like Mother Nature battle zones thanks to a rainstorm accompanied by howling, over 50 mile-an-hour wind gusts that raced across the area overnight.

According to DPW Director Richard Stinson this morning, at least 15 full trees came down on a combination of town and private properties. An additional 15 large tree limbs came down on cars and buildings, many blocking roads like Briarwood Lane in Montrose. A large old oak tree was felled in a backyard on Whittemore Terrace, the Item was told.

Residents were urged to help clear catch basins of leaves. The town has over 2,500 of them, and the DPW is not able to clear every one, Stinson explained.

He had a private tree company report to assist his men around 11 last night, and a whole complement of DPW crews came into work around 11:30 p.m.

“We will be at this all day,” Stinson said. “There are leaves and debris everywhere. After we’re done with that, we will remove the small tree limbs that are lying all over the place.”

He also cautioned those heading outside over the next few days. “You have to be very careful because some limbs which haven’t come down yet still may. Be careful on your own property and be observant where you’re going around.”

The town received about 3.2 inches of rain during the storm, which began with on and off showers yesterday mid-afternoon.

And the wind blew. Houses rattled overnight as gusts reached upwards of 75 miles an hour just south of Boston. Stinson said the local high was 51 miles an hour

The calls for storm-related tree damage, wires down and power outages started coming in to the Police Department, Fire Department, DPW and the light department at about 11 p.m. last night and continued past 6 this morning.

According the WMGLD General Manager Peter Dion, the most widespread power-related problem resulted from a tree down at Main and Lowell streets. Police initially received the call at about 11:20 reporting a tree taking down a power line and a transformer on a pole sparking. The DPW and the Light Department were able to clear the road of hazards relatively quickly, but large areas of Main and Lowell streets were without power until about 5:30 a.m. today, when power was restored to most of the affected area. Dion said that about 10 houses were still without power at about 9 a.m. this morning.

The two longest lasting outages were on Whittier Road and Harts Hill Road. A tree was reported down and power out on Whittier Road at about 1 a.m. That outage lasted well into the morning, according to Dion, as the light department had to wait for Verizon to reset a pole. Overnight storm damage to a couple of poles on Harts Hill Road also caused most of the senior housing in that area to lose power. Two buildings were still without power as of about 9 a.m. this morning, Dion said, as the MGLD was waiting for Verizon reset poles.

Public safety crews responded to other calls for trees and wires down at Pleasant and Cordis streets, and Perham Street before midnight last night. A caller reported a large tree branch blocking Newell Road at about 11:45 p.m. Just before midnight an Albion Street resident reported that a tree had fallen on her parked car.

Just after midnight, a tree was reported down in the roadway at Outlook and Strathmore roads. The DPW responded. At about 12:15 a.m. Police, firefighters and the DPW were notified that a tree had fallen on a house on Parker Road.

At about 12:30 a.m., the Fire Department responded to a report of water coming into the building from a leaking roof at the Colonial Point Apartments at 95 Audubon Rd.

Also at 1 a.m., a Stedman Street resident reported a tree down on his home.

At about 4 a.m., a caller from Forrester Road reported a pole down in front of her house. A portion of that neighborhood lost power and as of 11:30 a.m. power had yet to be restored.

The Fire Department, DPW and Light Department went to MacKenzie Lane and Briarwood Lane at about 4:15 a.m. after a resident reported a tree down on a house and on wires, causing a power outage in that neighborhood. Light department crews were on on scene and power was restored shortly after 9 a.m. today.

Also at about 4:15 a.m., the Fire Department, the Light Department and the DPW went to Indian Lane after a resident reported that a tree had fallen on wires and caught fire.

A large tree was reported down and blocking Bay State Road at about 5 a.m.

The Light Department responded to a report of wires down on Putnam Road at about 6 a.m. this morning.

Light department crews also restored power to Plymouth Road after an outage on that street.

The Fire Department responded to numerous calls for fire and carbon monoxide alarms that were tripped by power outages.

Conditions slowly improved early this morning as wind and rain subsided in central and eastern Massachusetts. Winds currently are strongest along the east coast and in southeast Massachusetts, where gusts are between 30 to 50 mph.

The National Weather Service is forecasting continued strong winds throughout the day, with the winds shifting to the west or southwest behind the departing storm. Wind gusts may be as high as 40 to 50 mph across the state, possibly causing additional scattered downed trees, branches and power lines.

Overnight, peak wind gusts were between 65 mph and 78 mph in southeastern Massachusetts, and 75 mph at the Blue Hills Reservation in Milton.

Overnight, numerous downed trees, wires and poles were reported across the state. Additionally, there were numerous reports of flash flooding of streets and urban areas.