Tough loss for Warriors against Marblehead in D4N quarterfinals 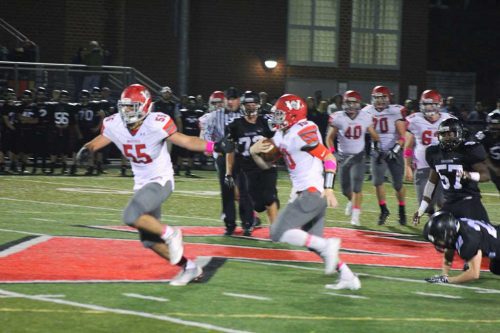 MARBLEHEAD — The phrase “tough loss” is often a hasty method to describe a game from the losing team’s perspective. It’s usually an overstated way to sum up a contest that a team desperately wanted to win, and it’s rarely an accurate summary.

In the case of the Wakefield Warrior football team against Marblehead last Friday in the Division 4 North quarterfinals, “tough loss” is an understatement.

The seventh-seeded Warriors hung with the undefeated second-seeded Magicians at Marblehead’s Piper Field for four quarters, and can safely say they left it all on the field in a 28-14 loss.

“We came up one or two plays short,” said Wakefield head coach Steve Cummings. “Our guys were dialed in. Our goal was to come out and prove that we could go toe-to-toe with anybody in the state, and after this game I hope these kids understand that we are good enough to do that.”

The Magicians got on the board first as they cashed in for seven on their opening drive. Marblehead’s passing game led by 6’7 senior quarterback Andy Clough converted when they needed to, on 3rd and 6 with an eight-yard pass to Teddy Mayle, and later on a 13-yard connection with Male again on 4th and 6 from the Wakefield 39. The Warrior defense continued to battle led by a couple of tackles for loss from senior co-captains Alex Joly and Ryan Fitzpatrick. Wakefield forced a 4th and 1 from the 17, but Clough broke free on an option keeper up the middle for a 17-yard touchdown and a 7-0 lead.

Wakefield responded with a long drive that closed the first quarter and spilled into the second. The drive started 1st and 25 from the 24 yard line after a chop block, but Wakefield chipped away after a nine-yard run from senior Bobby Young, and after a completion from quarterback Mike Lucey to Fitzpatrick, Young kept the drive alive with a first-down run for eight yards. The second quarter started with the Warriors facing a 3rd and 10 when Lucey connected with junior running back Danny Marinaccio, who made a nice catch after a deflection for 13 yards. Wakefield kept grinding with the running game and Young would eventually punch it in for a five-yard touchdown run. The point-after attempt was blocked, making the score 7-6.

“I thought they showed up great,” said Marblehead head coach Jim Rudloff of the Warriors. “They were executing their offense well in the beginning of the game. They’ve got a very inventive offense with that wing-T spread sort of thing that puts your defensive players in some very awkward positions and makes it difficult.”

The Magicians came right back on their next drive when a 36-yard pass from Clough to Derek Marino on the right sideline set them up on the five yard line, that sophomore running back Tim Cronin would run in on second down, making it 14-6 Marblehead.

After Wakefield went three-and-out, the defense came up huge with a goal-line stand to end the first half. Cronin caught a pass and made a cut up the field for 51 yards early in the drive, giving the Magicians a first down from the 13. Senior co-captain Brendan Coughlin set the edge on a first down run for no gain, and the Warriors forced another 4th down, this time with two yards to move the chains. On the previous play, senior tackle Evan McMaster lost his helmet, and came off the field when Marblehead took a timeout. He came back out for the 4th down play but coach Cummings was informed he had to sit the play out, unless Wakefield took a timeout. Without hesitation, coach Cummings called a timeout, allowing McMaster to go back in. It turned out to change the momentum, as McMaster led the charge up the middle, stuffing Clough at the line for a turnover-on-downs, and keeping the score at 14-6 going into halftime.

The energy on the visiting sideline steadily increased as the second half wore on and the Warriors proved to each other that they could win this game. Along with some added firepower from the Red Sea student section who made the long trek from Landrigan Field, the Warriors fought hard even when Marblehead took a 21-6 lead after another long pass from Clough to Marino, this time for a 44-yard touchdown.

Marinaccio stepped up on the next drive after another gritty return as he was finally dragged down at the 37. Marinaccio got the ball on 1st down and found the edge for 12 yards. Fitzpatrick followed that up with a 10-yard carry and the Warriors kept the drive alive on 4th and 3 when Lucey connected with Marinaccio for five. Marinaccio kept it going on second down from the Marblehead 27 when he went for 11 yards. Lucey found junior tight end Billy O’Keefe for nine yards, and Marinaccio capped his terrific drive with a two-yard TD run, followed by a catch in the end zone for a two-point conversion, making it 21-14 with 13 seconds left in the 3rd quarter and completely changing the momentum in this one.

“We didn’t quit even early in the second half when we were down two scores, we answered,” said Cummings.

On the first play of the 4th quarter, Clough dropped back to pass and threw a pick to Coughlin, sending the Wakefield sideline into a cautiously-optimistic frenzy that completely turned loose when Lucey rambled for 45 yards after a broken play on 3rd and five, earning a tip of the cap from the opposition.

“That was a great play,” said Rudloff. “He’s a talented player.”

Unfortunately, Wakefield couldn’t capitalize on the momentum, and as coach Cummings said, they came up a play short and the drive stalled after a sack on third down forced a 4th and 15 that Wakefield would turn over on downs.

The defense did their part to force a three-and-out on Marblehead’s next drive, giving Wakefield an opportunity with four minutes left in the game.

“We got the ball with a chance, and that’s a championship football team over there. You have to make plays, they’re not going to give you anything,” said Cummings.

Back-to-back sacks from Marblehead’s Cronin and Will Bosworth created impossible yardage forcing a punt with 2:28. That put the defense in a difficult spot, and Clough finished the Warriors off with a another long play, this time a 55-yard TD run to give the Magicians a 28-14 win. In the end, Clough finished with 249 total yards of offense (9-11 passing for 162 yards, 8 carries for 87 yards) and three total touchdowns.

After the dust settled, the pain felt by the Warriors was certainly tangible as Marblehead’s sideline cleared off with a well-earned victory.

“They should not be hanging their heads,” said Cummings. “They went at it against a championship team. We played a team that beat us because they made a couple of more plays than we did. They earned it.”

There was mutual respect at the end of this one, as Marblehead knew they too just beat a really good team.

“Steve does a really good job of getting his guys ready,” said Rudloff. “Last year they gave us looks we weren’t ready for and I felt like they did that again tonight. I thought their kids we incredibly tough and very smart.”

Wakefield will now play in the consolation bracket for two more weeks before getting ready for Melrose on Thanksgiving. It will certainly be a difficult task to turn the page, but coach Cummings’ message is clear, especially to the senior class.

“For us it’s an opportunity. I’ll tell our seniors ‘you get three more games. I know we’re not where we want to be but people that love this game and play this game with a passion, would do anything if you told them they could have three more games’ and then Melrose at the end. That’s a game that we really want. So we have to work towards getting there.”

Yes, this time it’s fair to use the phrase “tough loss,” and you can excuse the Warriors if it’s difficult to get over, but if you can allow one more sports cliche, Wakefield earned the right to hold their heads high after a truly entertaining and hard-fought game.

“I’m very proud of these guys,” said Cummings. “They came in and gave us everything in practice this week and on the field tonight. I couldn’t be prouder of that group of kids.”