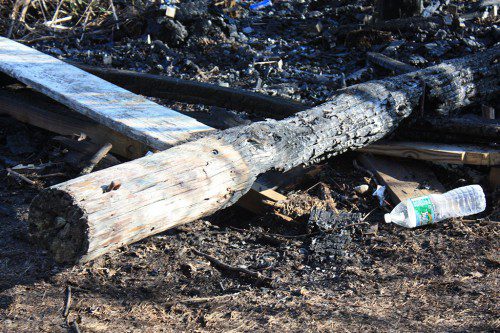 THE CHARRED remains of a wooden post that supported the observation tower overlooking Reedy Meadow is a visual reminder of the intensity of the May 6 brush fire that destroyed 65 acres of marsh. Fire officials suspect the five-alarm blaze originated at the tower, which provided exceptional views of the 540-acre marshland and the rare migratory birds that nest there. (Maureen Doherty Photo)

LYNNFIELD — In the aftermath of the five-alarm brush fire that destroyed 65 acres of Reedy Meadow on May 6, the Conservation Commission plans to install surveillance cameras on its land in the area.

Conservation Commission Chairwoman Denise Young told the Villager last week that “this is something that we take very seriously.” She explained that the commissioners wants to be pro-active in an effort to “prevent this from possibly happening in the future.”

Educating the public about the value of this National Historic Landmark is crucial to its preservation. Therefore, the commissioners remind townspeople and other visitors to Reedy Meadow and the Partridge Island boardwalk that it is home to “quite a number of state-listed birds and state-listed vegetation,” Young said.

It wasn’t just vegetation that was destroyed by the blaze that took more than six hours to knock down with assistance from 10 area departments. “A lot nesting birds were probably destroyed with the blaze because the fledglings can’t fly out of the nests,” she said.

As previously reported by the Villager, Fire Chief Mark Tetreault stated it is believed the fire originated at the wooden observation tower that overlooked the meadow near the end of the boardwalk. It was not believed to have “spontaneously” ignited, therefore, Tetreault called in the state Fire Marshal’s office to investigate. An official cause of the fire has not yet been determined and the investigation is ongoing.

The tower, which was built with donated funds under the direction of Conservation Commission, was completely destroyed by the fire. Dozens of beer cans were strewn about in the area as well.

Reedy Meadow is an inland 540-acre freshwater marsh dominated by cattails that straddles Lynnfield and Wakefield. It provides habitat for both native and rare migrating birds and was designated as a National Historic Landmark in 1972.

“We’re going to purchase cameras that hunters use and install them at the entrance of the boardwalk and maybe at some locations near the boardwalk,” Young said. ConCom members Paul Martindale and Melanie Lovell volunteered to research the best camera options. They will purchase the cameras with donated funds and be installed by ConCom members.

Young also reminds townspeople that the commission can impose fines on those who violate the rules and regulations governing Conservation Commission land. “There is a $50 fine for a first offense and a $100 find for a second offense for any violation on our land. This includes not removing trash and alcohol consumption, among others,” she said.