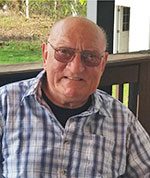 Mr. Goodwin was born in Winchester on Sept. 13, 1942, a son of the late Trueman and Claire (Melanson) Goodwin.

Al had been employed for Continental Can in Derry for 15 years, later working for U.S. Can in Chesterton, Ind. for 10 years. He retired from Symmetry Medical in Manchester, N.H.

Al enjoyed fishing and Bingo and was a member of the Deer Head Club in Hooksett, N.H. and the Halcyon of Derry.

Calling hours will be held on Monday, Oct. 26, from 5 to 8 p.m. in the Peabody Funeral Homes and Crematorium, 290 Mammoth Rd., Londonderry. Graveside services will be held on Tuesday at 10 a.m. at the Pillsbury Cemetery, Londonderry. To send a condolence or for more information, please visit www.peabodyfuneralhome.com.