NORTH READING — Tedeschi’s Food Shop, 202 North St., reached an agreement with the Selectmen resolving the store’s appeal of a three day beer and wine license suspension handed down by the Selectmen last March.

Tedeschi’s voluntarily surrendered their license to sell beer and wine last weekend, July 31, Aug. 1 and Aug. 2 to settle their appeal to the state’s Alcoholic Beverages Control Commission that was due to be heard on Aug. 5. As a result, the Selectmen voted unanimously Monday night to ratify the resolution of the appeal and approved the three days of suspension Tedeschi has already served, thus ending the matter.

The resolution stems from alcohol compliance checks conducted by the North Reading Police Department last January, in which three local stores, Tedeschi’s, Eastgate Liquors and Hess Express were charged by police with selling beer to a minor. All three stores said the violation was inadvertent and fired the clerks who made the illegal sales. The Selectmen voted to suspend the licenses of all three stores for three days, following a precedent the Board has set in the past for first–time violations. Hess served its three day suspension in April but Eastgate and Tedeschi’s decided to exercise their right to appeal to the ABCC and their hearings were scheduled for July and August.

Town Administrator Michael Gilleberto said the Selectmen attempted to schedule a meeting last Friday, July 31, to approve Tedeschi’s decision to accept the suspension, but the board could not muster a quorum at that time. Monday’s vote to ratify the resolution after the fact closes the book on the subject and both sides will waive the need for an appeal to the ABCC.

Eastgate Liquors has opted to exercise their right to appeal the suspension to Middlesex Superior Court. Gilleberto explained Eastgate’s appeal hearing was held before the ABCC on July 15 and seven days later, on July 22, the ABCC issued a decision affirming the Selectmen’s decision suspending the license for three days. Eastgate now has a 30 day window of opportunity dating from July 22 to appeal to Middlesex Superior Court.

Eastgate’s North Reading manager Paul Robinson appeared in person to inform the board of their intention to appeal. Eastgate general manager Dan Walls confirmed the store has retained counsel and intends to appeal, but hasn’t file yet. The Selectmen recognized Eastgate has the right to appeal and decided to hold any licnese suspension in abeyance for 30 days or until after Eastgate’s court date. “If they don’t file (in court), we set the dates,” and continue to monitor the case, suggested Selectman Stephen O’Leary. The next Selectmen’s meeting is Aug. 24, and the board can take further action then if Eastgate reconsiders and doesn’t file with the court.

In other business, the Selectmen voted unanimously to approve the corporate name of Hess Express, 231 Main St,, from Hess Mart Massachusetts, LLC, to Speedway, Massachusetts, LLC. Attorney Andrew Upton explained there’s no change in the manager, the corporate structure or the floor plan of the store — the only thing that will change is the store name. “The only Hess thing you’ll see in the future is the Hess truck at Christmas time. Everything else is changing to Speedway.”

Also Monday night: the Selectmen approved the change in directors of the Thomson Club Pro Shop, which has a beer and wine license. Gilleberto said this is a result of closer record keeping by the ABCC.

This is really not a change at all, said Tim Houten of Middleton, the Thomson Club secretary. He explained none of the directors own anything at Thomson. It’s technically not a change of ownership because there is no ownership, the club is a non–profit and not a stock corporation.

It’s strictly record keeping, Gilleberto agreed, but about six months ago the ABCC started to clamp down and make sure these records are kept current.

The directors are Houten, Joseph Manfra of Peabody, Patrick Furnari of Danvers, Matthew Piaker of Peabody, Peter Hemme of North Reading, Charles Hannon of Danvers and Joseph McCarthy of Lynnfield. 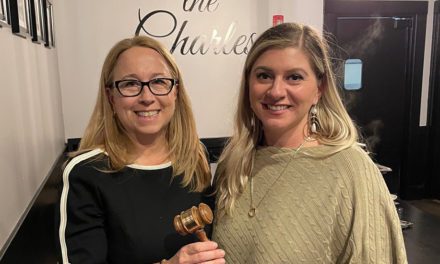