SSBC deals with another landscaping request 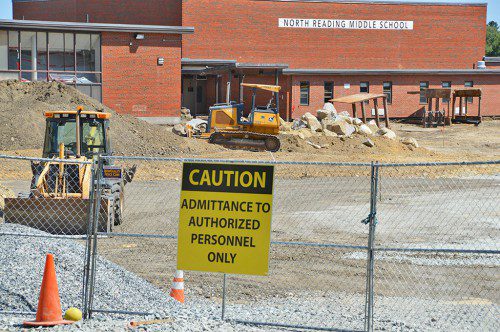 THE EVENTUAL DEMOLITION of the old North Reading High School is approaching and the entire area, including the former parking lot, is all blocked off. (Bob Turosz Photo)

NORTH READING — Alison Carlson, 15 Hill St., appeared before the Secondary Schools Building Committee (SSBC) to reiterate her request for trees and landscaping to be planted behind her property on July 28.

SSBC Chairman Chuck Carucci said funds are currently tight as the project winds down and noted only $175,000 remains in the project’s contingency fund. He noted the SSBC approved landscaping requests for several abutters to the project but he said it’s impossible to make everyone happy at this point in time.

“We would like to (help) everybody if we could,” said Carucci.

Carlson said she made sacrifices throughout the secondary schools project. She said during the meeting she was assured by the SSBC that landscaping would be installed near her property.

“I just want to make it clear that no one on this committee made any recommendations about landscaping,” said Venezia.

Carlson also raised several other concerns about the project during the meeting.

Carucci said as long as the charcoal filters are changed regularly, there should not be any more problems. However, he requested Carlson reach out to the SSBC if the odor continues.

Carlson said the problem has been resolved since last week’s SSBC meeting in an interview with the Transcript.

Carlson also inquired about the anticipated parking crunch that the SSBC and school officials are anticipating this fall sports season.

Superintendent of Schools Jon Bernard said contractors began working on the teacher parking lot near the old high school sooner than anticipated with a goal of making parking spaces available to townspeople coming to games this fall. Carucci noted there will be ample parking behind the secondary schools.

Carlson also raised concerns about lighting from the high school stairwell reflecting into her home from November to May. She informed the Transcript she has been working with Building and Grounds’ Wayne Hardacker to try and resolve the issue.