Thanksgiving Day Classic postponed, will be played this afternoon

Kickoff is scheduled for 1:30 p.m. at Landrigan Field 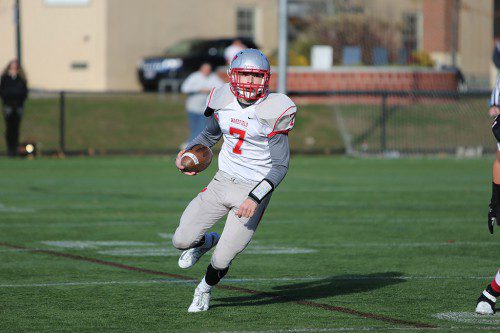 SENIOR QB Anthony Cecere and the rest of the Warrior football team had its 55th annual Thanksgiving Day Classic against Melrose postponed yesterday due to snow. The game will be made up this afternoon at Landrigan Field. (Donna Larsson File Photo)

WAKEFIELD — It has been a quarter of a century since a Thanksgiving Day Classic has been postponed, but Wednesday’s inclement weather resulted in the annual clash between the Wakefield Memorial High and Melrose High football teams being called off and rescheduled for today at 1:30 p.m. at Landrigan Field.

The call to postpone was made about midnight on Wednesday night when Director of Athletics and Student Activities Mike Boyages and DPW Director Richard Stinson stepped onto Landrigan Field to survey the situation. The entire field, stands, walkways and entrances were covered with heavy, wet snow. It was at that point the annual contest was pushed back a day.

At the time, it was felt that the field couldn’t be cleared off in time before the 10:15 a.m. kickoff. So the game was pushed back a day to allow enough time for the field to be cleared.

As a result of the postponement, the field was cleared yesterday starting at 7 a.m. as the Warrior football coaches and players reported for clean up duty. They were joined by members of the cheerleaders, dance team, marching band, and Warrior Club parents. They spent the next five hours getting the field cleared for today’s game.

“The decision was made late around midnight,” said Boyages. “It was pretty bad. The field was covered with a heavy, wet snow.”

The Thanksgiving Day postponement was the first for the Warriors since 1989, the year Wakefield won the Middlesex League championship. That year, snow resulted in the annual Thanksgiving Day classic being pushed back a couple of days.

More snow fell last night and was continuing to fall this morning. However today’s game will be played as scheduled. Members of the football team were back at Landrigan Field this morning around 6:30 a.m. to clear off the field once again.

“This time the snow is a light, fluffy snow,” said Boyages. “Most of the work is being done with leaf blowers. We are shoveling between the lines every five yards. It’s been tough. I couldn’t believe when I heard that we were going to get another one to three inches last night.”

Boyages gives credit to those who spent their Thanksgiving Day morning helping to get the field ready for today’s game.

“The football team, cheerleaders, dance team, marching band, Warrior Club members and town workers were out there helping yesterday,” said Boyages. “They used the plow for the parking lot for the entrance driveway to the field. Everyone was there from 7 a.m.-noon working to clean up the field. At that point, they had to go home and get ready for their Thanksgiving.”

The Thanksgiving Day Classic (a day later) will be the 55th in the rivalry and it is also the third time this season that Wakefield and Melrose are facing each other. The two rivals squared off in the regular season in September and faced each other in a Div. 3 Northwest quarterfinal. Both of those games were won by Melrose, so Wakefield is hoping for a different result this time around.

In the regular season meeting on Sept. 26, the Warriors (5-5) fell behind by a 17-0 score before rallying in the fourth quarter with 15 points to make things interesting in a 17-15 loss. In the playoff match-up on Oct. 31, Melrose rolled to a 24-0 triumph to end Wakefield’s hopes of going to a Super Bowl.

Meanwhile, the Red Raiders (9-2) kept on winning in the postseason and are in the Div. 3 Super Bowl which will be played on Saturday, Dec. 6 against Dartmouth at 6 p.m. at Gillette Stadium.

Melrose leads the longstanding rivalry, 55-41-6, with tomorrow’s game being the 103rd meeting between the schools. The rivalry dates back to 1901. Wakefield, however, leads the Thanksgiving Day 29-22-3, which dates back to 1960.

The Warriors are also 18-5-1 against Melrose over the past 21 years but have lost three in a row dating back to Thanksgiving last year. All three contests were played at Green Field. Also, Wakefield has lost two in a row on Thanksgiving and hasn’t posted a November victory against the Red Raiders since they prevailed by a 3-0 score in 2011, the last time the Warriors played in a Super Bowl.

Since the Halloween meeting, Wakefield lost to Winchester, 30-26, and edged Burlington by a 14-13 score. Melrose, meanwhile, defeated Woburn (20-19) and Concord-Carlisle (28-20) to repeat as Div. 3 Northwest champion. The Red Raiders played last Saturday and defeated Tewksbury, 14-7, in the Div. 3 state semifinal to advance to the their first Super Bowl contest since 1982.